UK2000 have recently released a very detailed addon of the London City airport for both FS2004 and FSX; my review is of the FSX product.

The London City airport (ICAO: EGLC) is a relatively young airport having been officially opened in 1988. It is the fifth busiest of the London area airports and the 14th busiest airport in the UK. In 2010 close to 2.8 million passengers used the airport.

Due to a number of different reasons the types of aircraft that are able to use the airport is limited; the physical dimensions of the 4,948 ft long runway and the steep glideslope along with stringent rules imposed to limit the noise impact from aircraft operations are all significant factors. Some of the more common airliner types that fly in and out of the London City airport are the ATR72, Airbus A318, Dash 8, BAe 146, Dornier 328, Embraer ERJ 135, Embraer 170, Embraer 190 and Fokker 50.

After completing the purchase of the product you are given a link to the UK2000 website. It is from here that you will get the scenery’s executable file along with your registration keycode.

Once you have downloaded the file you simply execute it and this will start the installation. You will be asked for your registration keycode and to verify the path to your FSX directory. The installer will also add the airport to the FSX scenery library.

Immediately after the scenery has been installed you are presented with the Options screen. It is here that you will be able to make your configuration choices. These options are described in the manual. 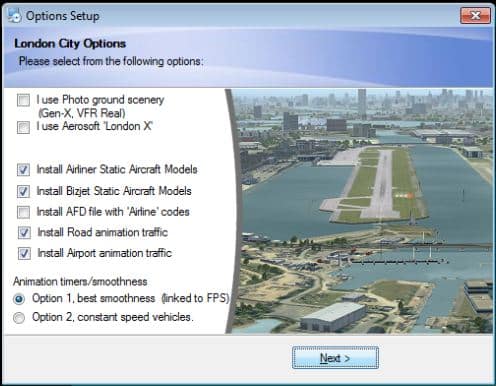 With this package you get a brief but informative 10 page PDF document. They start off with a bit of general airport information and then talk about the installation and uninstallation of the package and their recommended display settings. Page four  is all about the “Options” program. They take each of the settings and give a brief explanation. This is a must read!

The last half of the manual is devoted to screenshots of some of the visual highlights such as the 3D aircraft marshaller and the ILS and RVR sensors, to name just two of many. The final few pages give some insight into known issues for both FS2004 and FSX as well as compatibility with other popular scenery addons such as VFR London for FS2004 and London X from Aerosoft , finally they explain the AFCAD file and its use.

Charts are not included but they provide a link if you wish to download them.

London City airport is a rather small airport if you compare it to other London area airports such as Gatwick or Heathrow however it is still a very interesting location to fly in and out of because of where it is and believe it or not the degree of difficulty when landing or taking off. Another feature is that unlike most inland airports the runway is surrounded by water; there is the Royal Albert Docks to the north and the King George V docks to the south.

Looking at the screenshots it is easy to see that the differences between the FSX and the UK2000 versions of the airport are significant.

The airport itself has just a few structures, starting from the west and moving eastward is the Jet Centre and fire training area, fire station, terminal buildings and control tower. They are accurately located and realistically depicted. To recreate the airport they make extensive use of detailed hi resolution imaging along with realistic colouring and detailing.

This is a small airport so when you are on the runway or parked at one of the gates everything tends to be close up and so you quickly become aware of the quality work that has gone into the airport’s depiction. Although many details are integral to the graphic images they have also included some discrete 3d details such as wall mounted security cameras, light fixtures and step railings.

Many developers like to add interior detailing to some of the buildings and this is airport is no different. The control tower includes a console and controller’s chair. Perched in this lofty location you get a good view of the runway.

The scenery base uses photo scenery for the ground textures and hi resolution graphic images for the hard surfaces; this combination is becoming the norm in many addons. When done properly the results can be stunning and extremely realistic.

The use of photo scenery ground textures around the airport ensures that what you are seeing is an accurate depiction plus you are getting images that are sharp and extremely clear.  One possible drawback with the use of photo scenery is that you often see objects in the image that haven’t been represented by a 3d object. If you get too many of these it can look bad when you’re at ground level or low altitudes. I am happy to say that with London Xtreme they have done a great job at adding a sufficient number of objects and buildings so that it isn’t a problem here.

They included the usual array of objects and vehicles normally found at most airports. The quality and variety were quite good which was no real surprise. Some of the objects were the antennae and brightly coloured barriers near the fire training area, the ILS structures and the approach lights. They also included the PAPI lighting, taxiway signage, safety pylons, tow bars, freight trailers and more.

Vehicle quality was comparable to that of the objects; they were created with hi resolution graphics and with an eye for detail. The variety was also good; with many different types found throughout from small passenger cars and light trucks to large fire trucks, fuel trucks and transport trucks.

The scenery has some animations that bring movement and activity to London airport. Vehicle traffic is the most visible with cars and trucks seen moving along the adjacent roadways and bridges.

Within the airport grounds there are also vehicles moving about. I saw fire trucks, service vehicles and security vehicles making their way along the various service routes.

The Docklands Light Railway, also known as the DLR, is a major transportation link to and from the airport. It has been modelled and includes animated rail cars moving along the elevated track from the scenery boundary to the DLR terminal which is located adjacent to the airport’s main terminal building. I thought that it was definitely a highlight with this scenery.

Not as obvious as the road traffic are the animated windsocks that move with the wind and the aircraft marshaller that will great you when you arrive at the London City Airport Jet Centre.

In the default scenery the airport’s surroundings although filled with lots of autogen do not do the area justice and lack the character created by the neighbouring buildings and features such as the marina and adjacent bridges.

These enhancements go a long way to making this airport an interesting place to visit.

When it came to landing here I have to say that I found it to be challenging. To follow the ILS approach to either of the two runways you have a GS of 5.5 degrees rather than the usual 3 degrees. It took me a few tries before I was able to execute a successful approach and landing on runway 9 with the ERJ 135 that wouldn’t have sent my passengers scrambling for one of those paper bags you hope they never have to use because of your flying skills. All in all great fun though. Executing either of these approaches in the Cessna CT210 was less difficult but equally as fun.

All aspects of the night lighting I thought were well done especially the ground lighting. The different colours used are distinctly discernible but not too harsh. The other forms of lighting for building interiors and exteriors was very good and also give you a sense that there was night time activity at the airport.

I think it is important to mention performance with the London City airport scenery. There’s a good chance you might experience some form of performance hit while flying in the vicinity of the airport. The city of London is huge and densely populated with autogen and that has a definite impact on performance.  I did a number of flights into EGLC with and without the UK2000 London airport enabled in the FSX scenery library and my performance was almost identical each time proving to me that the performance degradation I experienced was inherent to the area and not the addon. My suggestion is to tweak your display settings and find that balance between visuals and performance; it is well worth the effort.

This is the fourth UK2000 scenery addon I’ve reviewed and I continue to be impressed by the quality of their work. This airport is realistic looking with an immersive quality that makes you want to come back again and again. This airport is great fun as well as a challenge. If you fly in the UK you will want to add this airport to your current stable of addons and if you haven’t yet I encourage you to give it a try. I am sure you won’t be disappointed.

Installer: Very good. Easy to use.