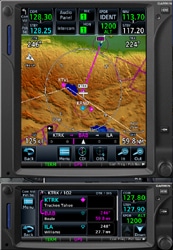 Flight One Software have become the latest company to announce support between their products and FSX: Steam Edition, with the release of version 1.05b for their Garmin trainer-based GTN650 and GTN750 products.

While Steam Edition compatibility is probably the ‘headline’ modification, the update also allows third-party developers greater compatibility to integrate the GTNs with their aircraft systems and also bring a number of fixes.

Flight1 Software is proud to announce that their popular GTN 650/750 Series Avionics has been updated to Version 1.05b. The update includes multiple fixes and enhancements, including Flight Simulator X – Steam Edition support.

The improvements within this update have allowed for greater compatibility with third-party developers to integrate the GTN Series avionics into their own aircraft. Major addon developers such as A2A Simulations, Alabeo, RealAir and others already have GTN specific integrations set up for their users or have planned to add GTN Series options in their future releases.

The Version 1.05b update includes the following:

For more information, screenshots, and to purchase this amazing software, go to: