Rick Desjardins reviews this latest primetime FlyTampa title: “General Edward Lawrence Logan International Airport, KBOS, is located in Boston, Massachusetts, USA. First opened in 1923 it was originally called Boston Airport and was used primarily by the Massachusetts Air Guard and the Army Air Corps. Later in 1927 the first commercial flights began between Boston and New York City. In 1956 the name was changed to the General Edward Lawrence Logan International Airport. Â Over the years the airport has expanded to include four terminal buildings, six runways and employ approximately 12,000 people. One of the major airports in the United States it is ranked 12th as far as international traffic and 20th in passenger volume serving over 26 million passengers a year.

When you purchase this product you actually get two versions; one for FS2004 and one for FSX.

Installation in typical FlyTampa fashion is straight forward and painless. Answer a few questions enter your registration info and viola, the installer does it’s thing. At the end of it all the scenery is added to your flight simulator and a program group is created whereby you can access the manual.

Recommended configuration settings can be found in the manual.

The scenery includes a 14 page PDF document packed with lots of information. It begins with several pages giving general airport information. There is a page outlining “What’s New?” Next we have an airport diagram and a page that gives some runway info including length and associated ILS frequencies. There are no approach or VFR charts included. The next two pages deal with installation and how to add the scenery if for some reason the installer fails to do it’s job. They’ve included screenshots for both FS2004 and FSX. After this is a section dedicated to performance. Through the use of more screenshots you can see their recommendations on how to configure FSX to optimize your experience. There is a page dealing with AI traffic issues and how they may be affected if you use Ultimate Traffic 2 or World of AI packages.Â  Although they mention only these two packages their observations should hold true even if you use other AI aircraft packages as AI does impact on frames no matter the source.Â  As with all packages the level of performance you get depends on many factors and only you can determine the best for your situation depending on your setup.Â  This is complex scenery and can be demanding on the hardware especially in FSX, that is why reading the manuals and the recommended settings is important to getting the most out of this addon. The final two pages contain questions and answers to some known issues and then several links including those to their website and support.

When you buy scenery created by the folks at FlyTampa you can be reasonably assured that what you are going to get will be an accurate and visually stunning product. This release of Boston’s Logon airport is just that.

I have to say that I was impressed with the airport in both the FS2004 and FSX.Â  If you compare both versions it will be clearly evident that overall FSX has more in the way of visual enhancements, they do make mention of this in the manual. I found the differences to be more evident in the areas surrounding the airport.

The airport is extremely well done.Â  The textures are crisp and there are lots of details. They’ve employed weathering effects and all four seasons are supported as well as realistic night lighting. All of these factors add up to give you an experience that is quite convincing.Â  Let me also say that I have AES 2.05 installed with Boston V3 enabled.

They’ve included all of the terminal buildings, all of the various carrier’s cargo hangers, fire stations, radars, approach and taxi lighting, the firefighting training area with the burned out shell of an old aircraft. Â You have a variety of airport vehicles and cargo all placed in the appropriate areas.Â  Then there are the ground textures of the airport itself; the grassy areas surrounding the runways, the runways, taxi ways and aprons.Â  The colours are very realistic, the concrete and asphalt have a weathered and cracked look, there are rubber tire marks on the touchdown areas of the runways and you have oily dirty patches in the aircraft parking spots. They went so far as to include water catch basins. On the roof tops you have air conditioner units, you also see that they have populated the rooftop car parks with a variety of vehicles. To add a bit more life you will find road traffic travelling in and out of the terminals on the major roadways. It is possible to even read the road signs. With regards to road traffic in FSX, if you have this option set to anything higher than 25% as shown in the manual you will see a mixture of the FSX road traffic combined with that of the scenery package and unfortunately the flight simulator traffic is all over the place.Â  I would recommend setting this to a lower value than recommended as you can see in one of the screenshots there are still a few stray vehicles even at that setting.

Flying in the winter there were several grassy medians in amongst the taxiways that remained green while all other ground cover was white. Some of the vehicles appeared 2 dimensional and if you zoom in close to the light standards near the terminal building you will see that the lights aren’t attached and appear to float next to the main brackets.Â  These are trivial when you consider the overall complexity and in no way diminish my high opinion of this product.

Although the main focus of this product is Boston’s Logan airport they’ve also modelled areas immediately surrounding it.Â  These include the downtown core, areas to the east and north of the city, the Boston Harbour and some of the islands found off the southern point of Logan airport.

This is where I found the biggest differences between the FS2004 and FSX versions and FSX clearly outshines FS2004 hands down.Â  The level of detailing in the ground bitmaps, the number and variety of objects, animated road traffic, etc are all superior in FSX.

With the inclusion of these extras you get to enjoy some of the architecture and landmarks in the Boston area.Â  Some of the more notable ones are Fort Independence, the piers of Boston’s Harbour (FSX version includes ships), Deer Island treatment facility (FSX only), the State House, International Place and Rowes Wharf to name just a few.Â  Again in FSX you get small pleasure craft and various large freighters in the nearby waters. These extras do so much for the overall appeal of the package. Now when you fly in and out of Logan you have a real sense for the large city of Boston.

There were a few disappointments however. A big one for me was with the ground bitmaps just outside the airport, this was evident in both versions but more so with FS2004. There is such a sharp contrast when compared to the level of detail and crispness of those within the boundaries of the airport you can’t help but notice how blocky and blurry they appear.Â  This is unfortunate.Â  I also found just north of the airport there is an area where the ground bitmap is duplicated and offset so that several roads are misaligned. North east of runway 15R you see a short stretch of shoreline where it doesn’t match up with the adjacent shoreline.Â  Another minor point, as you fly near the downtown you will also see that a few of the bridges don’t quite match up with the roadways.Â  These are the types of things that you may notice if you happen to be flying low and slow over the city sightseeing but they really aren’t very noticeable when you are landing or taking off from the airport.

While in FS2004 I thought I’d take my Cessna 206 float plane out for a spin.Â  When I went to land in the Boston Harbour next to the airport I was surprised to find out that it was not water but instead a hard surface coloured blue made to appear like water. When I tried the same thing with a Grumman Goose in FSX I was able to land so this problem is isolated to the FS2004 version.

I also noticed that Fort Independence remained green in winter even though the surrounding landscape was covered in snow.

By reading my review it should not come as a surprise that I highly recommend this package.Â  Despite some visual flaws it is hard not to be excited by this latest version of Boston’s Logan airport.Â  Some may baulk and say that they have just redone what was already a very good freeware addon but this release takes Boston Logan to a whole new level. It’s their attention to detail that makes this product so enjoyable.Â  In real life this is a very busy airport and so you will find it that way in flight simulator.Â  They have given flightsim enthusiasts an exciting place to fly in and out of. Regardless of which version of flightsim you are using this is a great addon! 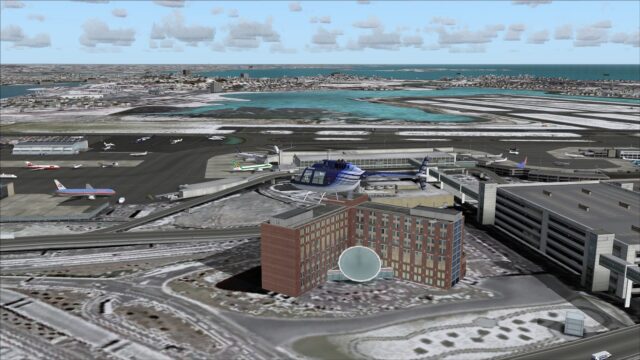 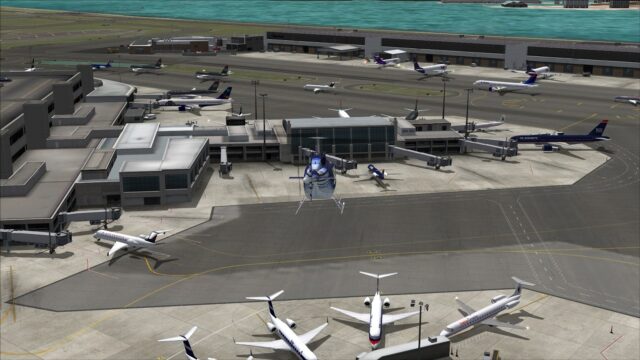 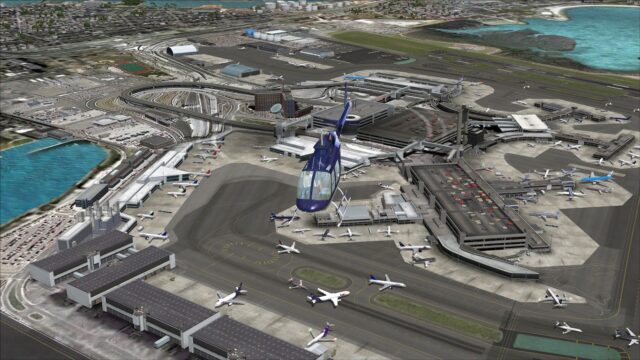 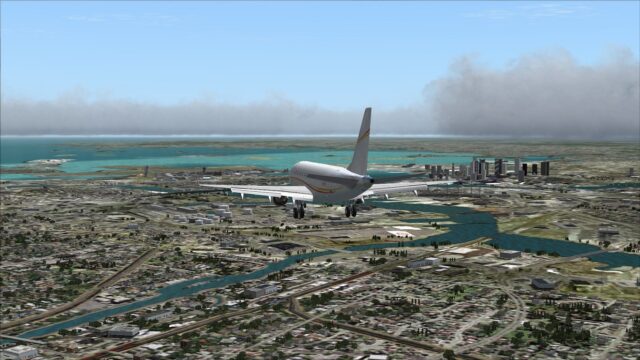 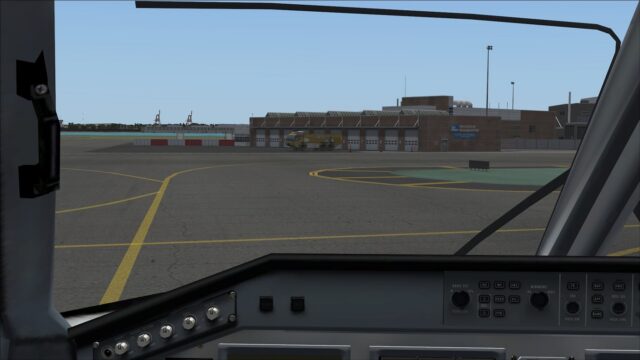 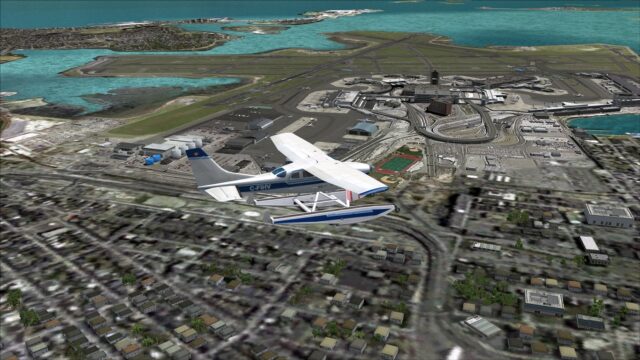 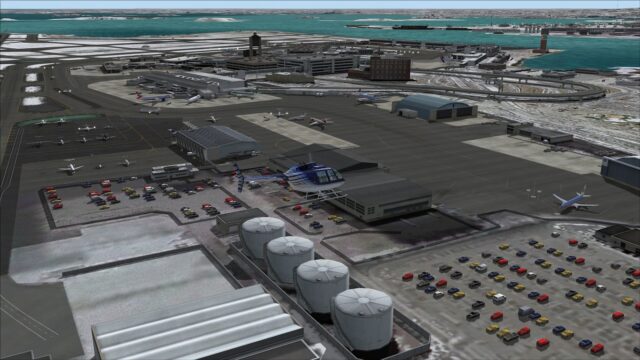 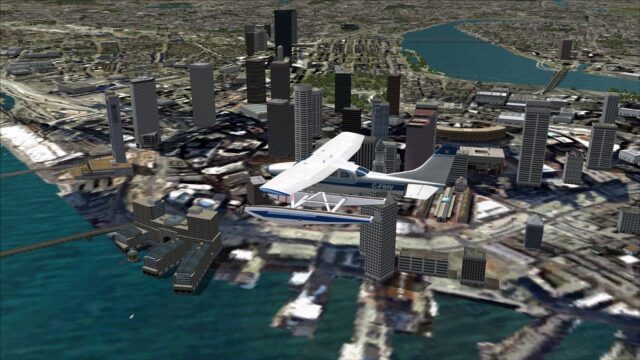 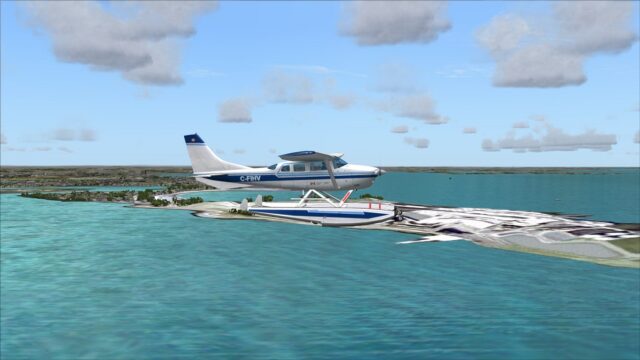 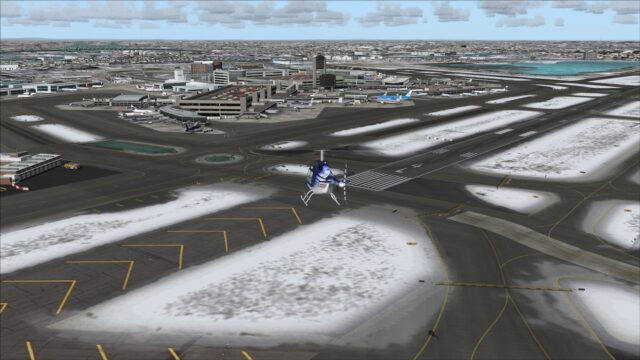 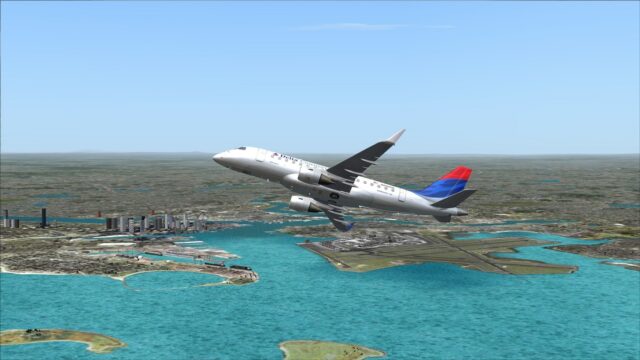 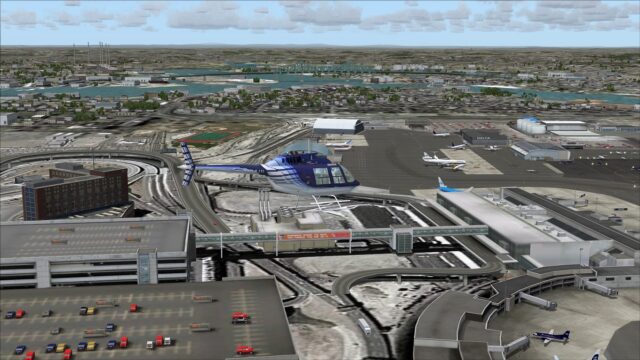 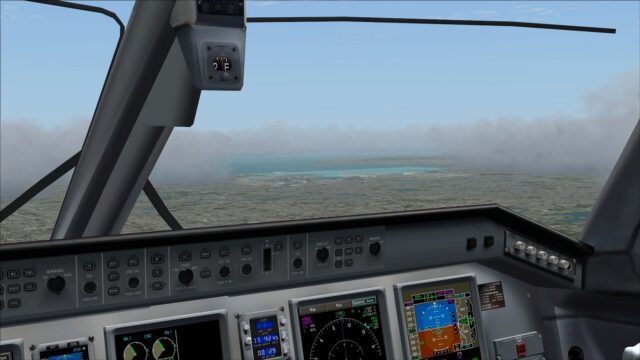 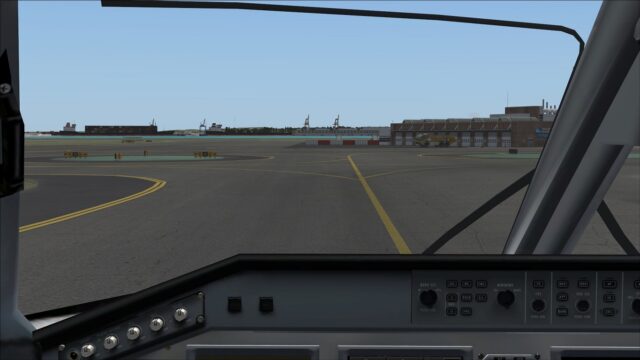 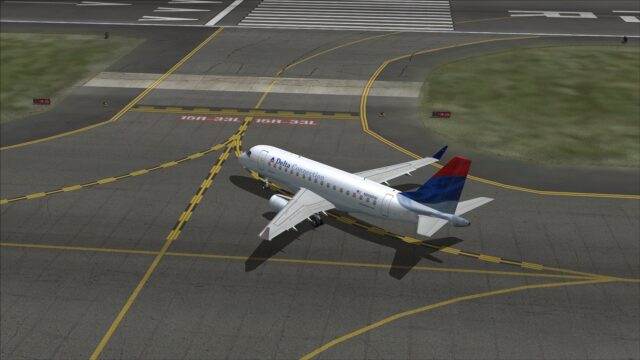 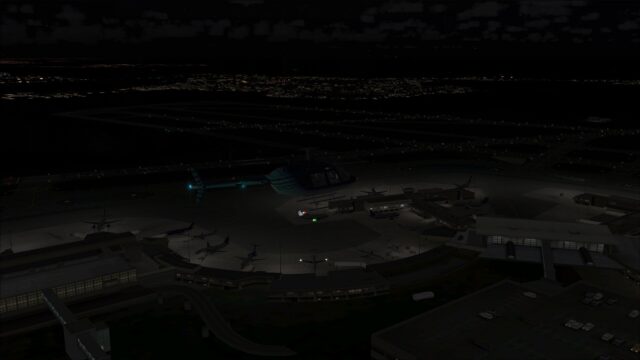 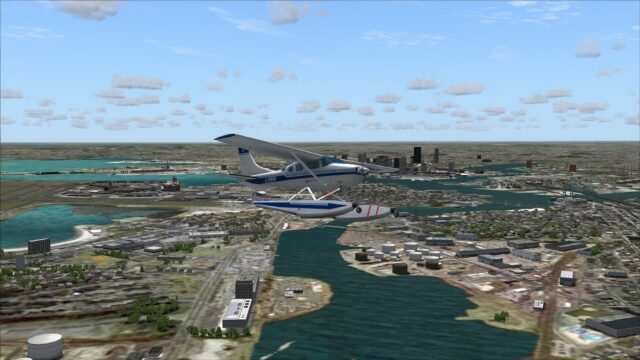 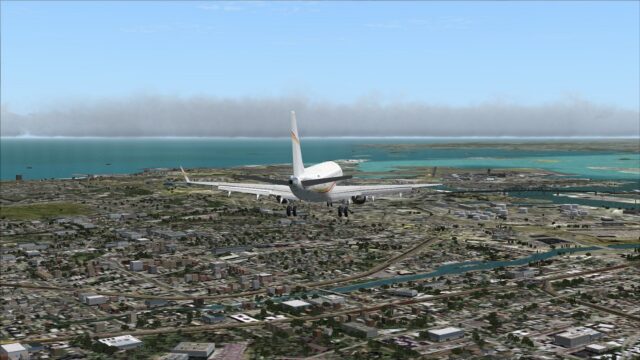 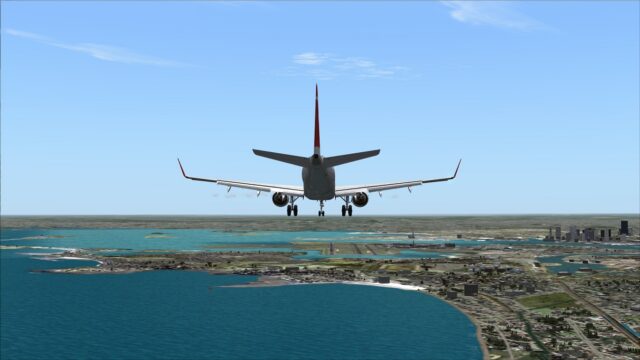 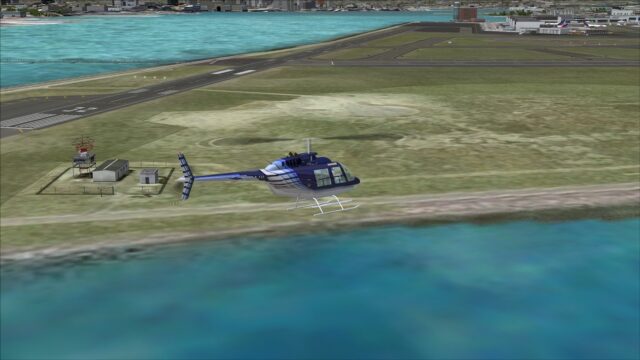 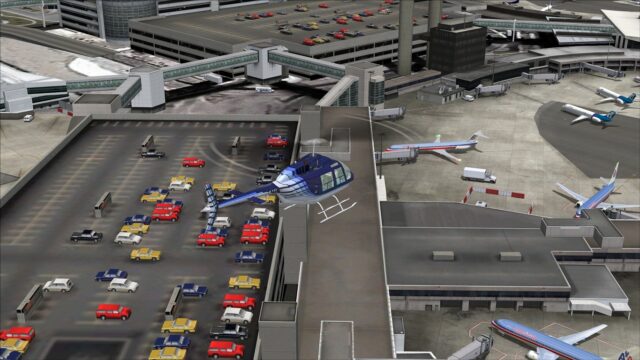 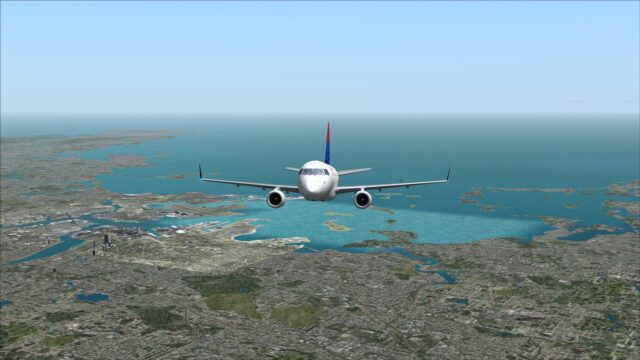 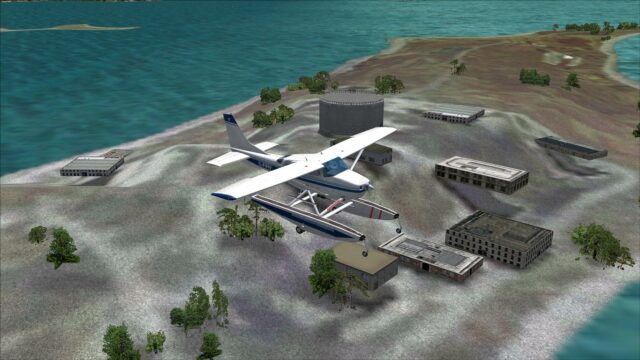 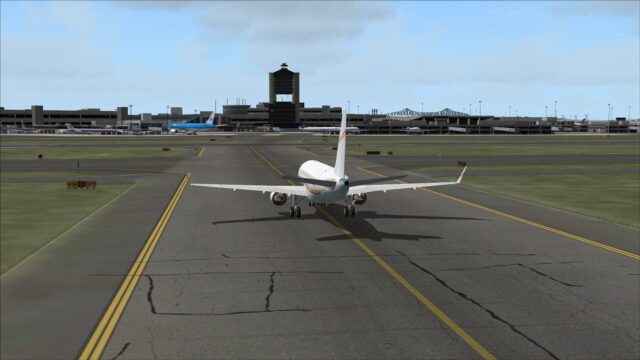 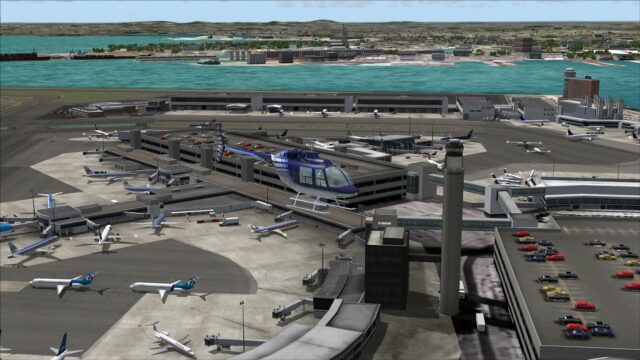 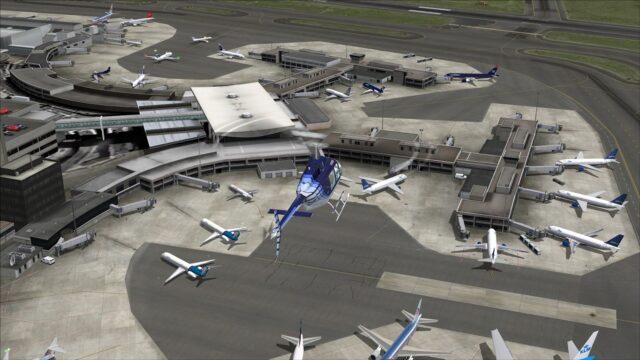 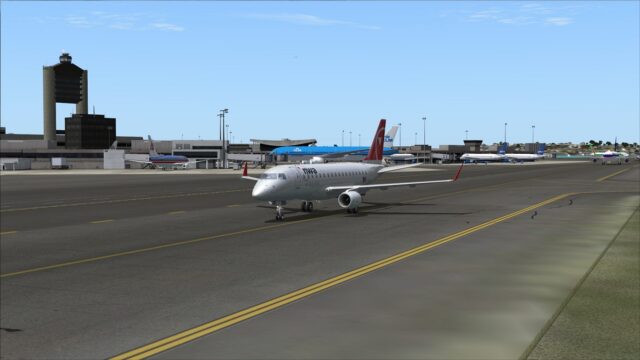 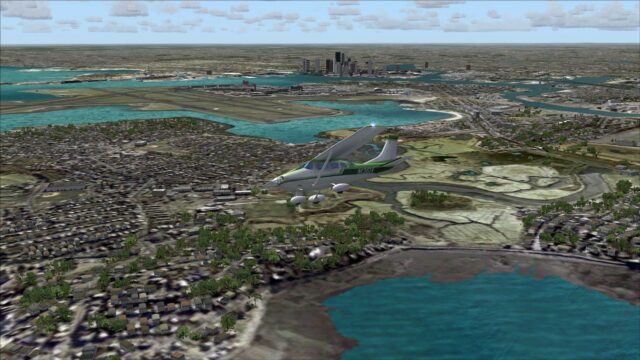 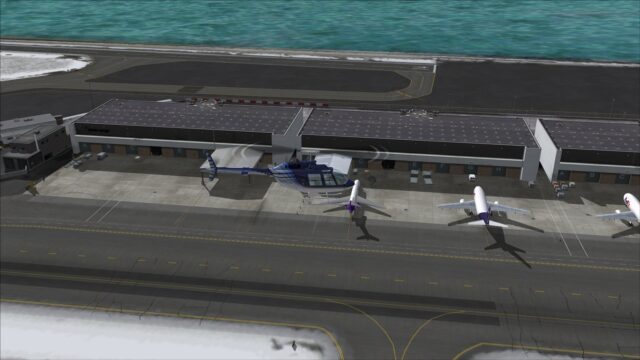