Manuel Márquez de León International Airport (ICAO: MMLP) is an international airport located at La Paz, Mexico. La Paz is the capitol city of the Mexican state of Baja California Sur which is located on the peninsula which bears this same name. This location is an important destination for tourists flying into the area.

To install you simply double click on the executable, this will start the installer, from here you check the path to FSX and click next.  The installer will run and the final screen gives you the option of viewing both the scenery activation guide and scenery manual. The installer does not add the scenery to the FSX scenery library so you must do this manually. The After-Install-FSX guide takes you through this process.

After the installation is done you will have a newly created program group Bajasim and under that a sub group LAP FSX. From this sub group you will have access to: Bajasim website on the web, Manual English, Manual Español, and Uninstall Bajasim SJD FSX which is a mistype as it does actually take you to the uninstall program for LAP FSX. 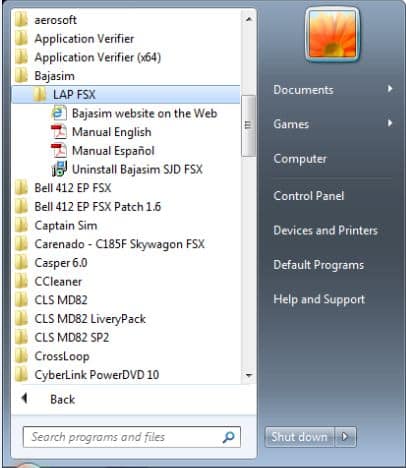 The After-Install-FSX manual is a step by step PDF guide on how to add the scenery to the FSX scenery library. It was very good except they used their San Jose Del Cabo scenery (Bajasim SJDX) as the example instead of La Paz.

The scenery manual is a colourful and polished looking 10 page PDF document that is divided into a number of sub sections; introduction, reference, installation, recommended settings, airport diagram and finally register your product. Having read the entire manual which I always encourage users to do I found the recommended settings pages to be the most informative. As it states in the manual, if you have the scenery density set to anything less than “Extremely Dense” the scenery will not display any of the 3d cars in the parking lots. The impact on performance is negligible so enabling them is worthwhile. The area surrounding the airport is very sparsely populated so it is my belief that very few users will have a problem using the settings as suggested in the manual.

As far as charts go the manual includes a single very basic airport diagram that shows the runway length and bearings. If you plan on flying the rwy 18 ILS or any of the VOR approaches you will need to do an internet search for online charts. I found the following site to be very useful.

Some of the main scenery characteristics as stated by Bajasim:

* Shaders techniques in all tarmac, taxiways and runway, you can see specular reflection, bump and detail maps. You will see the best ground ever for an FSX scenery!

* Our design system gives high detail with low FPS impact, we mean it.

* The best scenery for a Mexican airport available!!!

This was my first exposure to an airport scenery from the Bajasim group so I was anxious to see the airport and how it performed.

Beginning with how the overall scenery compared to the FSX default; the differences are striking. The FSX rendition is little more than a runway, apron and several default buildings; not a very appealing airport.

The Bajasim scenery is a complete remake and turns that all around. The visual elements at La Paz are among some of the best I have seen for any airport. The techniques they use to give everything a realistic look are exceptional. Regardless of whether it is a large building or a small baggage cart the same care has been taken and is clearly evident.

The is not a large airport nor does it have lots of buildings but those that are found at La Paz have been reproduced in a very convincing manner.

The use of muted colours and shading is extensive. Too often I see buildings done in bright solid colours and by doing so the end results are usually buildings that look fake; that definitely isn’t the case here. In the screenshots you can see that the colouring and shading techniques give the buildings depth and seem to accentuate those changes brought about by aging and exposure to weather.

Hi resolution graphics and adding details to the outsides of the buildings also goes a long way to giving them a much more realistic look.  Take as an example the small building pictured in my screenshot. Clearly visible are wall mounted lights, a shelf below the window and you will also notice that the windows and doorway are recessed.  It is too easy to have these as part of a simple graphic image but doing that results in a much less realistic looking building. Examples of colouring and shading techniques can also be seen here.

These same attributes can be found in many other buildings at La Paz.

The folks at Bajasim weren’t happy with just modelling the exteriors of the buildings they also took that extra step and added detailed interiors to the main passenger terminal and several of the hangars. In the main terminal there is seating, arrival/departure monitors and wall signs all clearly visible and done in a very convincing manner.

The largest of the airport hangars has some very complicated looking support beams that are found along the exterior walls and also as dividers.

To the north of the tower there is a series of five open hangars each slightly different from the other. These simple open hangars clearly show the best of both exterior and interior modelling and how colours and added details can make even simple looking buildings interesting.

Throughout the airport they’ve included a good variety of objects and vehicles. The addition of these always goes a long way to making an airport appear vibrant and active. I can’t think of anything that was lacking, they had all of the usual items such as lighting, fencing, navaids, etc.  Less common but still necessary in my opinion there was freight and cargo and then others such as 45 gallon drums, pylons, metal cylinders, garbage bins, street signs and parking lamp posts that complete the picture.

I was not surprised with the quality of all these objects. I saw that the same techniques which had been used in creating the buildings were also used here and the results were just as impressive. The use of hi resolution graphic images also made a huge difference. Near the cargo building there was some freight and stacks of wooden pallets; because they used hi resolution graphics you could make out the wrinkles in the protective plastic wrap on the freight and also the individual wooden slats for the pallets.

The airport included both static and animated vehicles; the variety was good with various types of airport service vehicles and cars. The quality was comparable to that of the objects with the same methods used in their creation. The only type of vehicle lacking that I could think of that would have added some value is a refuelling vehicle.

There are some animations included as part of La Paz. The most obvious would be the vehicle traffic seen in the apron areas; here you will see several vans and pushback tugs moving about. They follow the roads quite well except for the pushback tugs that originate in a fenced compound just off the main apron, they go straight through the surrounding fence to the road.

The other interesting animation I saw was the vehicle barriers located at the security checkpoints, as the vehicle approaches the gate raises to allow the vehicle to pass and then drops after the vehicle has gone by.

Ground textures were composed of hi resolution graphics so they looked very realistic. There were signs of deterioration along the edges of the runways and taxiways. The painted markings were clear and easy to read but also displayed signs of wear, you could see cracking and areas where the paint appeared to have been worn away, apron parking spots had signs of dirt and fuel stains.

There were a few problems I noticed with the ground textures along the hard surfaces. As I taxied I would notice that occasionally the aircraft shadows would disappear and then reappear suddenly as I moved along. Not too distracting but noticeable.

The surrounding area has also been enhanced to a certain degree. At first glance it may not seem very obvious but there are distinct differences in the coast lines and with landclass.

The airport is equipped for ILS and VOR/DME approaches or if you like VFR flying is definitely an option as the surrounding areas are relatively flat with the airport visible from a distance. I was able to successfully execute instrument and visual approaches for both runways without any problems.

Night time flying at La Paz was nice.  Every type of lighting was extremely well done and with an eye for realism.

As you can see in the screenshots the building exterior and interior lighting was spot on in my opinion and was very effectively used.

The way the interior lighting is projected out from an opening, in this case the open hangar doors is some of the best examples I have seen anywhere. The way in which the light is dispersed is very good.

Another nice little detail they chose to add was the ground lighting caused by the taxiway signs. It is one of those little touches that are only visible up close but when you see it you can’t help but be impressed.

My only real concern had to do with aircraft lighting and its projection on the ground textures as I moved along the runway and taxiways. At certain spots they would disappear and then reappear. This was the same type of problem I described earlier with the aircraft shadows disappearing from the ground textures during the daytime.

I had never flown any scenery from this group until this review and must say I came away very impressed with what I saw. The scenery has all the necessary elements to make it a top notch airport addon and so I have no problem recommending it.

I look forward to any upcoming projects they release and hope they might decide to expand their horizons and take on larger, busier airports in the future.

Installer:  Very good. Simple to use however user must manually add scenery to FSX.