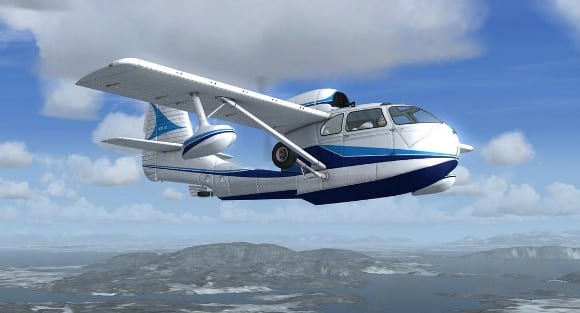 Another one of those little aircraft that it’s hard not to like, the Rebuplic Seabee was born in the immediate aftermath of World War II, as Republic’s attempt to get into the expected massive boom in civil aviation.

Although the market may not have quite grown as fast as some people expected, the Seabee’s unusual looks and excellent capabilities carried it through and it is still a very popular aircraft 60 years later.

Now, with the support of owners and operators of the type, KC Flight Shop have produced this little aircraft for use in Microsoft Flight Simulator X, available to buy as a download from their website. For the full Press Release including a features list, please click on “Read More”, below.

KC FlightShop Introduces the Republic RC-3 Seabee an all-metal amphibious sports aircraft designed by Percival Spencer in 1944 and the RC-1 made its first flight with Spencer at the controls.  By the end of 1944 Republic had received 1,972 civilian orders for the $3,500 airplane.  The Navy granted Republic Aviation the rights to use the name Seabee for the civilian version. Today, more than 60 years after production ended, the Seabee is still the most popular amphibian on the used-market…

The KC FlightShop recreates the first production RC-3 Seabee with original equipment as released from the factory for a vintage flight experience, the fully interactive VC uses 3D gauges throughout with every system modeled.

Visit the KC FlightShop http://www.kcflightshop.com/?page_id=245 for a look at this new release!