East Midlands Airport, EGNX, is situated between the cities of Derby, Leicester and Nottingham in central England. The site was originally a Royal Air Force station used during the Second World War but was decommissioned in 1946. It was eventually purchased by local government authorities in 1964 and was reopened for passenger traffic in 1965. The airport serves as a hub for low cost air carriers Bmibaby and Ryanair. In terms of traffic it is the 12th busiest airport for passenger travel seeing approximately 4 million passengers in 2010 and the 2nd busiest for cargo traffic processing just under 274,000 tonnes. The airport has a single runway 09/27 @ 9,491ft.

My review is of the FSX version of this scenery addon which is comprised of the airport, the East Midlands Aeropark Museum, a small strip of land around the airport’s perimeter, a short stretch of the M1 roadway and the nearby Ratcliff Power Station.

After purchasing the product you are given a link to the UK2000 website where you will be able to retrieve the scenery’s executable file along with your registration keycode.

Once you download the file you simply execute it and this will start the installation. You will be asked for your registration keycode and to verify the path to your FSX directory. The installer will also add East Midlands Xtreme to the FSX scenery library.

For the final phase of the installation process you are presented with the “Options” setup screen where you can enable various scenery elements such as 3d cars, animations and static aircraft. The choices are explained in the manual. The nice thing about these options is that if you change your mind you can access this screen at any time and modify your choices, there is no need to reinstall the scenery. 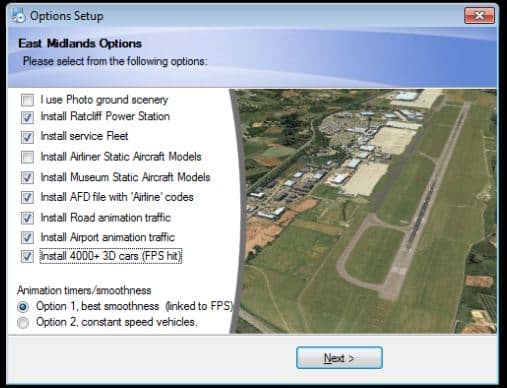 Included is a 10 page manual that covers the FS2004 and FSX versions of the scenery. In the manual you will find such topics as history, install and uninstall, recommended display settings, legal stuff and a couple of pages of pictures highlighting some of their visual features. There is a page devoted to the option settings that are available on the “Options” setup screen. A must read if you are looking for more information on these choices.

Generally speaking the buildings at this airport are simple one and two story structures. The developers have done a very good job at making them look as accurate as possible adding details where appropriate, using colours and hi resolution images so that we get a sense of any additional details, aging and exposure to the elements. Another important factor was the precise placement of these structures on the base photo scenery. All of these combine to make the entire area look very realistic.

The airport has quite a few buildings and for the most part they have all been included right down to the firefighter training area and  the small communications sheds on the inner airfield grounds.

The two largest structures are the main passenger terminal and the EMA Cargo West hangar. Unlike many other international airports the main passenger terminal is a rather non-descript two storey building where passengers exit the building to the tarmac  and make their way to the aircraft via ground walkways instead of jet ways. This characteristic is realistically reproduced right down to the metal walkway fencing that directs passengers to the various aircraft parking spots. They have even included people standing about looking as though they are waiting to board. On the arrival side of the terminal there are other details worth checking out such as the curved sloping awnings and covered walkways.

The largest structure at the airport is the EMA Cargo West building which houses DHL Aviation. This building is not very fancy, in fact it is basically a large rectangular box with a multi-slope roof and large overhangs that protect cargo and outside loading areas from the elements. There are many details but some are only visible up close such as the trusses that are on the underside of the overhang facing the apron.

Overall the quality of the buildings here at East Midlands is very good and there are many more examples of how they accomplished this if you take the time to explore the grounds. They pay equal attention to all sides of their buildings.

In real life there is no such thing as a perfectly straight line where the asphalt or concrete meet the adjacent grassy surfaces and there is always evidence of aging and stress usually seen by surface cracks. They were able to reproduce both of these extremely well so looking out from the cockpit as I taxied from the runway it made for some pretty amazing visuals.

The crispness, clarity and colouring of the other ground textures also helped in giving the whole airport a real world look. The grassy areas looked like fields of cut grass with changes in colour to match the changes in seasons. Aprons were equally detailed with some colour variations possibly due to differences in materials and with some dirt and fuel stains at a number of parking stands.

When you are at an airport much of your time is spent at ground level and so it’s important that this aspect of the scenery be as realistic as possible and they’ve accomplished that.

Paying attention to the details is something this group does quite well and you can see that throughout the entire airport scenery. I can’t think of anything in the way of objects that was missed here; of course they include all of the necessary items for navigation and airport operations plus much more. There are many different objects and vehicles that together make the airport look alive and full of activity. The level of the modelling is quite good as well so even at close range everything looked quite good.

Known for its cargo operations this aspect of airport operations was well represented with a variety vehicles and cargo and freight containers placed strategically near the  cargo terminals as if they were being prepared to be shipped or picked up. Company vehicles for DHL, the Royal Mail and UPS were also included at their appropriate terminal sites.

I won’t go into naming all the different types of objects I saw as I made my way meticulously through the airport grounds but I will mention some specific highlights. The runway/taxiway signage and PAPI lights include conduit, housing discolouration and the concrete pads that these objects are set upon. I also came across markers that even included the hex nuts on their support posts. This type of dedication to detail is one example why this group’s airports rank as some of the best.

For the vehicles in this scenery I have to say that the variety and quality was very good. From either side of the airport fence there were wonderful examples of their work visibly moving about or parked in various locations. Service vehicle on the tarmac, security vehicles patrolling the perimeter fence, cars and trucks driving on the nearby roads. All of these further reinforced the impression that there was lots of concurrent activity happening.

There are several large parking lots right next to the airport, you have the ability to populate them with thousands, yes thousands, of cars if you so choose to enable this in the options screen. I personally think that this is a big plus with the UK2000 airports; the ability to choose whether or not you want them to show. I didn’t find them to be a big drain on performance only a huge boost in realism.

This airport has a feature not found at many airports; an onsite museum which at this location is known as the Aeropark. To recreate this they’ve included 10 detailed static aircraft; a mix of both military and civilian which include a few well known ones such as the Avro Vulcan and Harrier jump jet. This is an area that was interesting to explore and a favorite of mine.

There are a number of animations incorporated into the scenery. They include some of the more common ones such as vehicle traffic on the airport service roads and nearby roadways and exhaust smoke billowing from the smoke stacks of several airport buildings and the nearby Ratcliff Power station.

Additionally there are some which are not commonly included as part of an airport scenery addon. They’ve included aircraft marshallers and service vehicles at a number of the parking stands. I experimented with this and liked how the marshaller would guide me in, the arm movements were smooth and the guidance was pretty accurate in relation to parking on the painted markings.

To go along with the marshallers there are air stairs and various service vehicles at these parking locations, the movements of these are triggered by changing your Nav 1 frequency. This worked well, the problem was with having them properly lined up with the aircraft and its doors. Most times I have to say that I was forced to slew the aircraft slightly one way or the other to get everything correct. Considering that you would normally have to pay for a third party program such as AES to get this type of feature I was still very impressed with the results. To have the scenery properly recognize third party aircraft such as the PMDG 737 without any special configuration info is a tall order.

As my first night flight I chose to fly from Dublin to East Midland making an ILS approach into runway 27. My introduction to the night time experience began as the approach lights to runway 27 appeared in the distance. As I got closer I was first able to distinguish the rows of lights and then the individual light sources that made up these rows, each light appearing as a precise dot of light. Eventually all of the different colours used along the runways and taxiways were clearly visible; red, green, blue and white. Looking towards the airport I could see the soft glow of the overhead lighting illuminating the aprons and the interior and exterior lighting of the buildings. Seeing all of this I knew I was in for a treat. After a successful landing taxiing to the terminal was even more impressive. At ground level the developer’s quest to give the sim pilot a feeling of being there in the moment was very successful. From my vantage point in the cockpit of the 737 I felt as if I was at East Midlands, it was that realistic. In addition to everything else I saw there were vehicles travelling along the service roads that had headlights and tail lights glowing, this added to the overall feeling that I was at a busy airport in the midst of night time operations. All aspects of the night time experience were top notch.

I never found performance to be an issue. With the majority of my flights being with the PMDG 737, all scenery elements enabled plus Ultimate Traffic X for my AI I was able to maintain a nice fluid experience with good frame rates at all times.

The airport sceneries this group puts out get better with each new release. This is one airport that I loved day or night. There are lots of details and interesting features included with East Midlands Airport that I believe make it a must have for anyone interested in flying to an airport in the UK. Definitely a must have.

Installer: Very good. Easy to use.