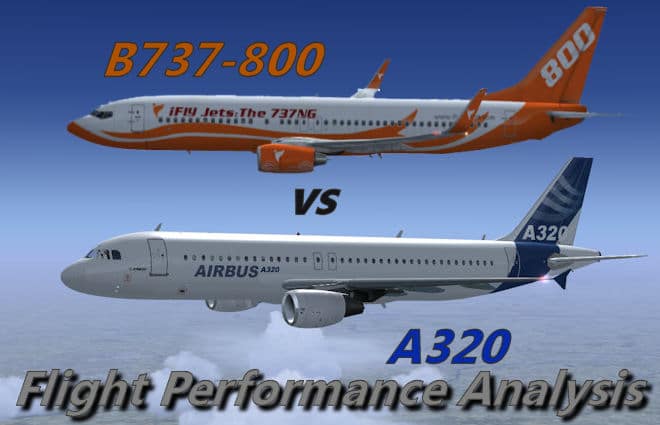 The question of which aircraft to use, the A320 or B737, is on the minds of real airlines. We’re going to take it to the virtual aviation world and put these two aircraft to the test and see which one is better for your VA.

Flight simmers, a.k.a. vPilots, are a unique group. We strive to simulate the real world on our PC’s Flight Simulator and go great lengths to mimic real airline operations.

In this article I will take you through a “flight test” analysis of two aircraft that are always in competition with each other on routes around the world, the Airbus 320 and Boeing 737. When I first started this analysis I was comparing the A320 to the B737-700 because that seems to be the real world competitor to the A320. Then, thought that it’s unfair as the 737-700 is a lighter aircraft with fewer seats and will burn less fuel for sure. So, I changed the analysis over to the 737-800 which is closer in weight and passenger loads. In a future analysis I’ll compare the 737-700 with the A319.

Many routes traveled are usually anywhere from 1-4 hours such as weekend excursions to a casino, resort, or daily business trips for executives. Heavily traveled routes such as Toronto – Montreal, London – Paris, Sao Paulo – Rio De Janeiro, Manila – Cebu, and New York – Washington, are often done with aircraft that hold around 150 passengers. Both the A320 and B737-800 are aircraft that fit into this category.

I will not endure to tell you what’s wrong or right about these versions’ models. Many reviews have been done already. Rather I’m going to take them out on test flights and help you to decide if these are the aircraft you want to fly for your VA (or not) and which one will earn you more virtual dollars if your VA pays you. In order to be fair I had to create some baselines. These are the rules I followed in order to give you a fair flight test.

You will see gallons per nautical mile used (gal/nm). The higher the number here the less fuel efficient the aircraft is. Lower numbers are better. I’ll provide the average take-off weight of each aircraft, average passenger load (pax), and these will be given for flights under 400nm and over 400nm separately.

This information is taken from the aircraft.cfg files and test flights, not real world data.

Going into this exercise my expectations were that the 737-800 would outperform the A320 by a wide margin because I know that the Wilco A320 is slow to climb to cruise altitude at average or above weights. Therefore, I thought, this would cause a greater fuel burn.

As you can see in the chart below I was wrong. I’m also impressed that the CFM and IAE versions of the Wilco A320 produced a different result which indicates they have paid attention to detail as far as the engines go.

We can see that the A320 CFM outfitted model is the best performer as far as fuel burn. We can also see that the cruise speed of the B737-800 is slightly faster than the A320. Which one is better for your VA?

However, over 400nm it’s a closer race and with the 737-800’s higher seat capacity you can make more money on those routes. Of course, that’s only if you are flying with nearly 100% pax loads. You will arrive at your destination faster but very marginally and it won’t result in getting another route per day out of your B737-800 vs. the A320 so you won’t make any money there. You’ll save a few dollars on pilot salaries.

A couple of things to note before I leave you. The iFly 737 requires a little more throttle to get moving from a stand still. Wilco’s A320 idles at 18-20% N1 while on the real aircraft it’s closer to 15% hence the FSX model starts to move when brakes are released. The A320 is hard to slow down on descent. Make sure you leave plenty of time for speed reduction at FL100 or you’ll be in trouble with ATC. iFly’s 737-800 spoilers are far more effective than Wilco’s are in the air so it’s less of an issue with the 737.

I have been a huge fan of the 737 since my young days but even I have to concede the A320 with the CFM engines is the winner of this flight test. Thanks for reading.