Edinburgh Airport, ICAO: EGPH, is located in the City of Edinburgh, Scotland. In 2011 it was the busiest airport in Scotland handling just over 9.4 million passengers and the sixth busiest in the United Kingdom. Like so many other modern day airports Edinburgh was originally a military aerodrome. Opened in 1915 by the Royal Flying Corps it was the most northerly British air defence base in World War 1 and was known as Turnhouse Aerodrome. The first commercial flights began in the late 1940’s with its eventual turnover to the control of a civilian authority, the Ministry of Aviation, in 1960. Over the years a second runway was added as well as numerous enhancements to the terminal plus a brand new tower. The airport has two runways: 06/24 @ 8,386ft and 12/30 @ 5,896ft.

Installation is straight forward. You run the installer’s executable file, enter your product keycode, choose and confirm the installation path and let it continue. As the final step the scenery is added to the FSX scenery library.

When I did my review of the FSX version I was running V3.04 of this scenery.

After the installation has completed you will be presented with an options set up screen. The choices you make come into effect on the next restart of FSX. Each is well explained in the product manual. 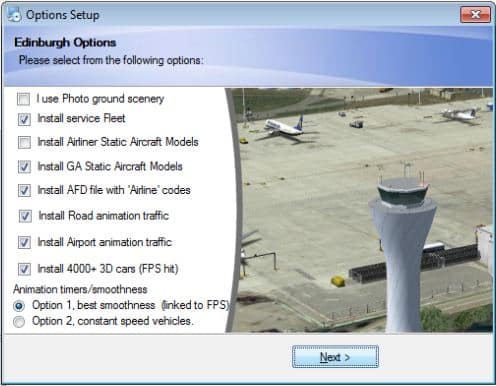 Brief and to the point best describes the manual. It provides some useful information regarding the options which are available through the “Options setup” popup as well as display settings and other basic addon info.

There are no charts but they can be easily found by doing a search on the internet.

As seen in the screenshot the scenery coverage does not extend much beyond the airport’s perimeter.

The scenery base consists of high resolution photo textures. The quality is such that the images remain clear and crisp even at very low altitudes. The problem with this is that you see many details in the images that have not been recreated with 3D objects.

The grassy areas that surround the runways look very good and this is what you will normally see as you fly in and out of Edinburgh.

One of the highlights with the UK2000 scenery products is the realistic looking hard surface areas. I think that they rank up there with the best.

This is another busy airport with relatively few structures but two of them stand out, the large passenger terminal and the ultra-modern looking control tower.

The terminal is a “U” shaped structure which flanks the south east side of the main apron continuing over to include the South East Pier which opened in 2006. The structure contains good detailing provided mostly through the use of quality images. I would have liked to see more in the way of discrete detailing to enhance the 3 dimensional look which I feel is important. Luckily, there are jetways and walkway canopies that help break up the silhouette along the apron side of the terminal building, this helps in minimizing the flat look that would otherwise detract from the visuals.

The control tower has a rather unique shape and looks like an upside down funnel. Its lines are clean and modern and have been captured in the scenery quite nicely. In addition to getting the shape right they’ve included a transparent controller’s pod and some roof mounted antennae. Again they use good quality imagery to add most of the detailing to the structure.

Immediately next to the terminal is a multi-level parking garage. It looks good however the building’s overall appearance could have been greatly improved if the rooftop level was populated with 3D cars and not just a flat bitmap image. Perhaps in the future they might consider including parking garages such as this in the 3D cars option.

The airport has a number of other buildings; fire station, hangars, and other support structures. The same rendering techniques used for the terminal and tower are used in these so the visual quality is the same. Near the business aviation apron is a large hangar, it is worth mentioning because they have left the large doors at either end open and inside are several small business jets. Another one of those visual enhancements to spruce up the airport and make it a bit more visually interesting.

Edinburgh is a busy airport hosting commercial, GA/business and cargo operations. To bring that point home they’ve added what I consider to be a nice variety of objects and vehicles. The quality of these items is quite good and the quantity and placement is such that it compliments and reinforces these different activities that are all taking place.

In addition to all of the requisite objects they’ve included you have the ability to add static aircraft via the options screen. In my configuration I chose to add the GA static aircraft models. I like the variety in aircraft types and where they have them situated. They certainly make a positive contribution adding another visual dimension to the airport scenery.

An option they give users that I really like is the one to add “4000 +3D cars” in the nearby parking lots. Empty parking lots are not realistic. This is a great feature that I think definitely boosts the scenery’s appearance.

I mentioned in a previous review and I will mention it again. Visible throughout the scenery are flat bitmap images of people seemingly engaged in different activities. Although there intentions are good I wish they would update them to a standard comparable to the remainder of the product. They may have been cutting edge at one time but they are woefully outdated now.

With complex scenery there is always a chance that something will get put in a wrong location and I came across this in just a couple of instances. Considering the complexity of the product that isn’t bad. One example is a yellow security vehicle parked between a barrier and the terminal at the South East Pier located in front of stand 23. Unfortunately it is obvious because of its location.

The product comes with animated vehicular traffic inside the airport and on nearby roadways within the scenery area. So you can see a variety of both airport service vehicles and regular vehicle traffic moving about.

The scenery also comes with active jetways and a service fleet. The service fleet which must be enabled via the options screen is available at 4 locations; gates 1, 10, 27 and 34. It does a pretty good job at figuring out where to place the vehicles but it is very rudimentary compared to other 3rd party programs on the market that are dedicated to aircraft servicing. GSX supports the airport while AES currently does not. Without having to invest in either one of these other programs it does add some of this type of functionality.

The airport has a number of parking stands equipped with visual docking guidance systems. I tried this feature at various stands and found that they worked as they should, guiding me through visual light cues to my desired parking location.

I found the night time experience to be immersive; each of the different types of lighting looked realistic and was well done. I was especially impressed with the ground lighting and how the light’s glow appeared transparent and softly illuminated the ground immediately around the fixture’s base.

This group continues to produce some really nice scenery. I enjoyed this product finding it to be realistic with some great features. If you have any desire to fly in the UK you will want to give this airport and group a try.

Documentation: Good but brief. No charts.