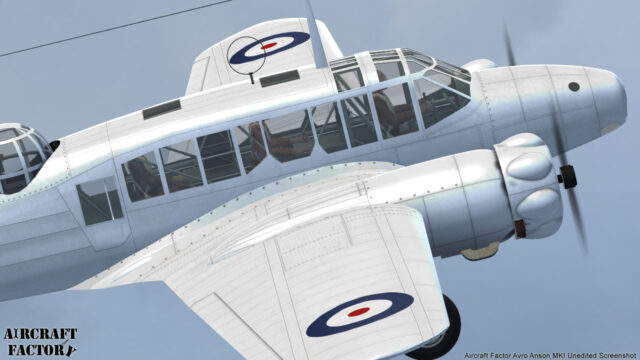 We don’t normally announce new subforums on developers’ websites, but we’ll make an exception when they are showing previews of upcoming and previously unannounced aircraft – in this case the WW2 British Avro Anson I, as part of A2A’s “Aircraft Factory” line.

The “Faithful Annie” served in every theatre of the war in large numbers, in roles as varied as training, coastal patrol, search and rescue, communications, army co-operation, transport, ambulance, crew taxi and even once, on the night of 1st/2nd March 1942, being used to extract agents from Occupied France. Unfortunately very few early marks survive to the modern day, although one has recently returned to flight in New Zealand. With the support forum now open, it’s a reasonable suggestion that you’ll be able to add this one to your hangar soon. Visit the forum here to see some screenshots of the upcoming model.