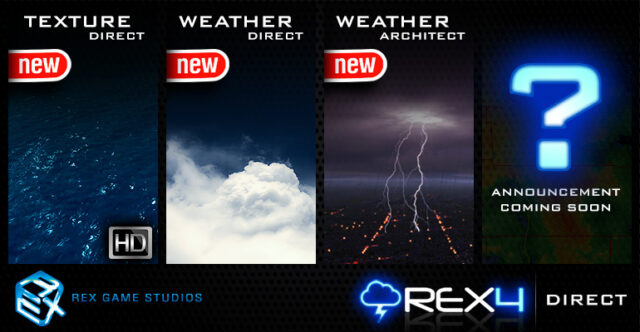 REX Game Studios have announced the release of their new website for REX 4 Direct which includes information on the upcoming Weather Architect package which is currently in the Beta testing phase. Click below for the full press release.

PHOENIX, AZ – REX GAME STUDIOS is pleased to announce the release of the new and updated REX 4 Direct product website, including new information about the soon to be released REX 4 Weather Architect.

See the difference that REX 4 Direct will bring to your flight simulator experience by visiting the dedicated website: http://www.rexdirectexperience.com

REX 4 Direct is a new breed of environment add-on applications from award-winning REX Game Studios. These apps are more powerful than before with an unprecedented amount of accuracy & realism! REX 4 Direct is compatible with Microsoft’s Flight Simulator X and Lockheed Martin’s Prepar3D version 1 and 2.

REX Game Studios is an award-winning leader in environment simulation add-ons with connections to consumers, businesses and institutions worldwide. The company’s offering span global services and home computing. More information can be found online at rexgamestudios.com