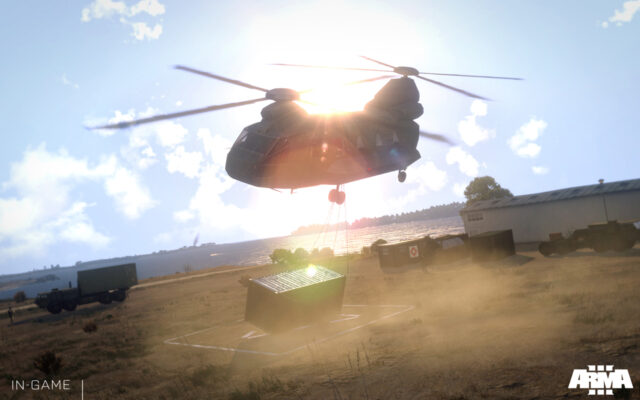 Armed Assault 3 developers Bohemia Interactive have announced that that next DLC title for their futuristic ‘soldier sim’ will be entitled “Helicopters“, which might suggest exactly what the content might be.

The paid DLC release, the second for the latest ArmA series installation, will include two heavy lift helicopters, one for each ‘side’ of the conflict; the “CH-67 Huron” pictured above, designed to be a development of the CH-47 Chinook, and the “Mi-290 Taru“, a co-axial rotor design similar to the US Skycrane. The latter aircraft brings sling-loading to the game, while the whole expansion is designed to bring logistics and resupply to a platform more used to front-line fighting activities.

Along with the release of Helicopters, which is scheduled for the start of November, the game’s core content will be updated, including an option flight model called “Rotorlib“, which is an upgraded version of that used in Bohemia’s short-lived Take on Helicopters title.

For more details, visit this link.

What that guy said above.

It’s a pingback, because our Chinese colleagues have posted a link to this article. If you want some real fun, translate it using both Bing and Google translation pages and see which one mentions badgers, dragons or invisible llamas for no apparent reason.