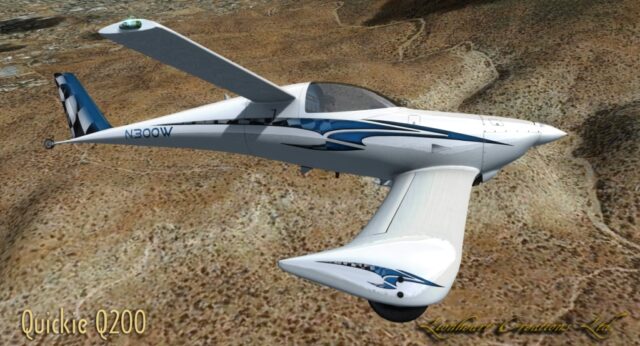 Before anyone starts contacting management about the headline, we should point out that the Quickie Q200 is a new fictional aircraft – based on the 1980s Q200 Dragonfly – from Lionheart Creations for FSX and P3D.

Designed as powered by a Continental O-200 engine, the Quickie has a cruise speed of 180mph, which you’ll find indicated on a ‘classic steam’, rather than modern glass, panel layout. It certainly is an eye-catching design, about which you can find more here, or you can read the developer’s press release by clicking “Read More“, below.

“Lionheart Creations are proud to announce another release to their fleet of extreme detail aircraft lines.

For those that who never heard of this famous plane from back in the 1980’s, one bought a kit of the Q2 and built it in his garage.  The aircraft was capable of cruise speeds upwards of 180 MPH and had excellent fuel mileage as well, able to get up to 400 NM range from a 23 gallon fuel tank.”