Emanuel Hagen, one of the Aerosoft forum moderators was privileged enough to be sent the Dash 8 Pro release candidate version by Majestic themselves. Having published his post in a few Facebook groups, he kindly allowed me to republish it here and on v-aviation.net.

last weekend Majestic was nice enough to give me the release candidate of the Dash 8 Pro Edition for a first look which I’d like to share with you.

I did my recurrency on the Dash in KRDD and EGHI.

On my plan there was lots of system manual reading (which I already did the week before I finally got the plane) and lateron lots of touch and go’s to get profficient on the handling of the plane again in all situations.
That’s something I always do when transitioning to a new plane.

Basically when you can fly the Pilot version you can also fly the Pro version.
You will notice however that there are lots of new gimmics here and there (like the actual load screen in the FMS during FPLN or FUEL X-Fill).

The first you really notice is of course the most obvious since it is right in front of you: The HUD!
Let me take this away: Those of you who don’t like HUDs can disable it in the control panel.

The HUD is first class and does exactly what it is supposed to do.
Pilots of the 737NG will immediatly feel familiar since the software of the system behind it is basically the same.
There are some little things here and there and of course the Dash 8 specific differences which you’ll notice (take a look at the speed bugs for example).

To my bad I have to admit I never really liked HUDs in airliners, but in the Dash I absolutly love it!
I even prefer it over the NGX HUD since Majestic found their way around the two bugs the NGXes HUD has (the vanishing indication behind the glareshield and the disappearing cockpit windshield behind the HUD which is expecially noticable if you lean back a little or fly from the Copilots seat).
Other than that they’re pretty much the same standart now, congratulations Majestic!

The next bigger point are the flight dynamics.
The Pro really handles a lot nicer! You can really feel the improved rate at which the joystickinput is read.
This is actually the first plane where I’d say you no longer feel the limitations of the flight simulator, but of my Saitek Yoke!

Actually just like in the Pilot version the Pro doesn’t use the FS internal flight dynamic engine at all which creates a very unique feeling to this aircraft and which makes it handle very special.
In a truely positive way that is!

Regardless of whether you fly it by hand or on autopilot, you’ll love it!

During my recurrency I did around 20 approaches of all kinds with about 4:30h total flying time, covering everything, from ILS to RNAV, LOC, LOC BC, VOR, NDB-DME to visual approaches, some with and some without using the HUD.
It was really a change to get back into the Dash after flying Jetliners for the last two years now!

After the initial part of my training in typically good californian weather Great Britian welcomed be at its best!
50kt wind all the way down to 500ft with some rather foggy conditions.
After flying in California for two months now this was really something to get into again, expecially with the great flight dynamics engine of the Dash!

I really felt the winds pushing and pulling on the aircraft and it was quite hard to fight the winds on the first attempt!
After flying 8 approaches there today I could handle it quite well at the end.

Finally some words about the performance:
Those of you who own the Pilot version will be aware of the stunning performance Majestic achieved by handling all the systems and flight dynamics outside of flight simulator.
I was really surprised and glad at the same time to see they get exactly the same in the Pro version!
Here’s some numbers:
In the NGX in KSFO I get around 25fps in my typical flying conditions.
In the Dash8 I get 45! That’s 20 more than in the NGX while the Pro is at least equally complex, if not due to the circuit braker simulation a lot more complex!

That’s it for now, tomorrow you can all experience this yourselves!
Hope to see you in the air soon!”

In addition to that, he included the following images. They sure look spectacular and I can’t wait to see the “Pro” version available tomorrow! 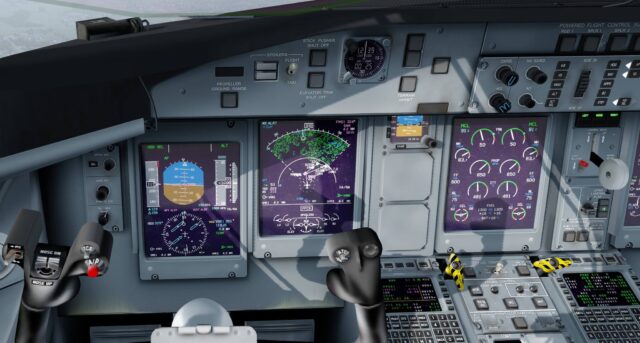