PMDG Have released another status update today regarding the 747-400BCF. You may find their full post below, in addition to on the original Avsim page.

“Since we spent a bit of time discussing cargo hauling on the PMDG DC-6 Cloudmaster, which is due out next week, I thought it might be appropriate to give you a bit of an update on the PMDG 747-400 Queen of the Skies II, focusing on Boeing Converted Freighter, this time!

(You can find my overview of the 400F, which is a dedicated freighter, in an earlier post by using the search function in the forum…)

Around the turn of the century, Boeing identified a growing market for the 747-400 passenger aircraft that were coming out of service with passenger airlines around the world.  This market opportunity involved taking possession of the airplane, reconditioning it for freight use, using a Sawzall to create an aft, main deck cargo door, and putting the airplane back to work with a new lease on life!

Unlike the native built 400F, the 747-400BCF does not have a nose cargo door, which does limit slightly the outsized cargo that can be carried aboard, but the airplane was targeting directly to existing 400F operators as a good, solid lower cost way to expand fleet size and capabilities.

We are including the 400BCF in the initial release of the PMDG 747-400 Queen of the Skies II, along with her own unique loading and operating characteristics!  From the updated cockpit displays, reconfigured loading menu options, to animation and operation of the main deck cargo door- we are bringing you a great rendition of the 400BCF! 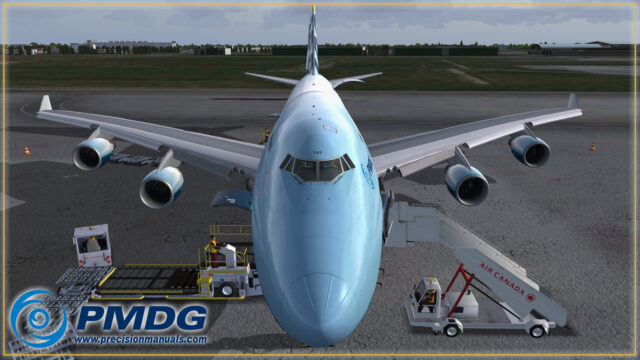 This image shows off quite a few details of our model that really make it stand out nicely for those with an eye for detail.  From the leading edge devices and the different materials they are made of, to the visual effect of the “sutter twist” on the wing tips.  Detail from nose, to engine pylons to the stabilizers and rudder-  we have spared no effort to put as much detail into the model as possible.  The more you look at this airplane in detail within the sim, the more you will see and discover has gone into making the model a convincing replica of the real world original.  So much of the character and shape is perfectly in place, that the airplane is a convincing presence in the sim. 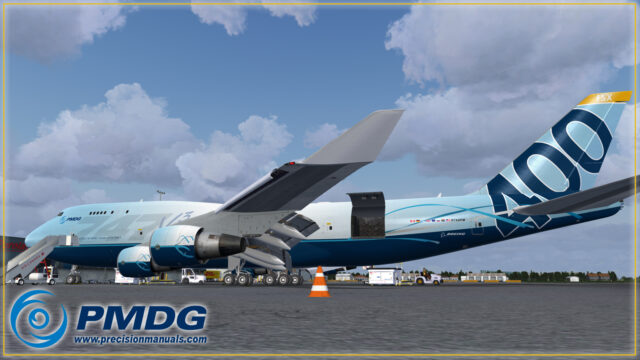 From the side, you get a good view of the main deck cargo door that was added to the airplane (using the Sawzall!) in order to make her a freighter.  The detail on the cargo deck is of the usual PMDG high standard, and the cargo visibility changes with adjustments to the payload via the load manager- just to keep things interesting. In this view, you also get a good view of the Pratt & Whitney engines, pylons and the flap and gear detail work. 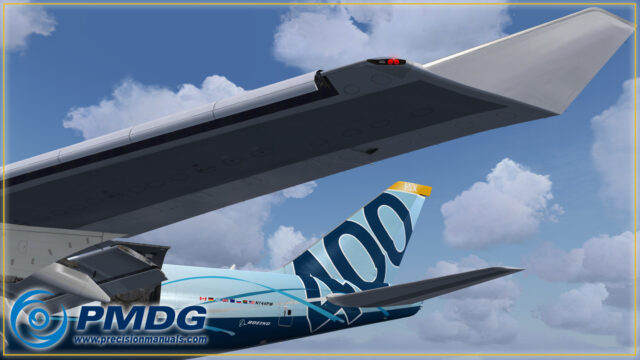 While we are out here, take a good close look at the detail of the winglet.  These are freshly painted, since the airplane is newly in service, but if you grab one of the older liveries, with the paintwork appropriately worn, it will not look quite so pristine.  Static wicks, fuel vent ports, inspection covers and fastener detail… it is all there. 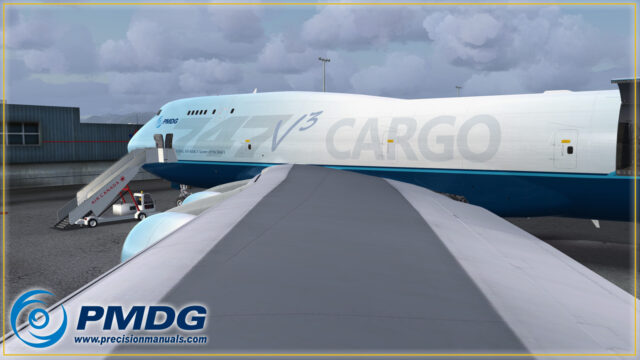 Never one to shirk from danger, we sent Jason out onto the wing to grab you a quick detail photo to show the wing and flight control detail from out there near the winglet.  Our original intent had been to soak the wing with deice fluid before he got out there- but he was too quick for us this time. 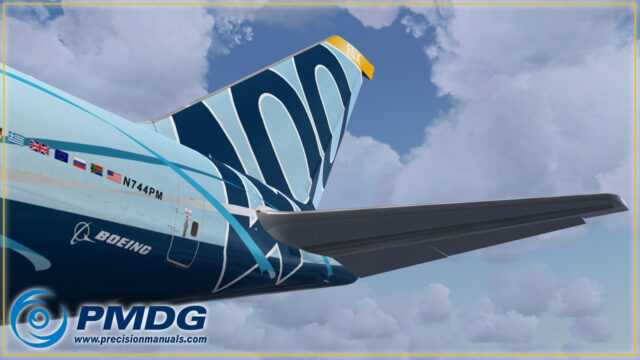 Wrapping up this evening’s update, a quick view of the tail feathers.  In this image, the hydraulics are clearly depressurized, and the wind is pushing the rudder over since the PCUs are not pressurised.  The elevator has sagged as well, which is characteristic of the fluid having passed out of the system while the airplane sits.  You can see the trim indexes on the side of the fuselage, and they correctly represent the position of the stabiliser at the correct trim setting… That tail plane angle will bring us to an interesting learning experience when you fuel the airplane, as well… but more on that later!

We will bring those to you relatively soon- if I can squeeze a bit of time in between debugging and stuffing new features into the product before beta testing.  This past Sunday night we built ALPHA 46, which is actually version 3.00.7275…  It is not quite ready for beta testing, but we are beginning to ponder when to schedule the official beginning of beta test season for the 747-400.

The primary hold-back has been a complete rebuild of the flight model and creation of three unique and totally independent engine models from which you can choose.  Each engine type has its own unique performance and behaviours, based on their actual counterparts- and while it doesn’t change the way the airplane flies beyond the obviously minor thrust differences, you will notice differences such as spool times, displayed parameters and of course, sound….

Okay- that is all for tonight!  I will shout when we finally get her into beta testing, as that will be a good milestone for all of us.  (I think I’ll have a few more updates for you before then, however!)