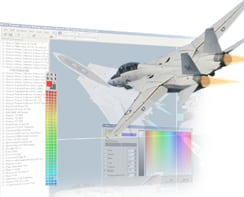 Out of the box, you can review, edit, and visualize in 3D live your painting works, without need of the simulator.

For the changelog click here, and read the press release copy below.

Version 2.24 brings several bug fixes and some new features, including
the so requested support for Prepar3D aircraft.

FS Repaint is an easy-to-use software for changing the appearance of
your FSIM aircraft. In just a few minutes, you can dramatically
transform the look of your Flight Simulator planes. With the simplicity
of FS Repaint, your fleet will be larger in no time at all.

Whether you want to just change the shade of your favorite plane, add
your own personalized logo to the tail or engage in a full-fledged
“restoration” of an old classic, FS Repaint will get the job done.

FS Repaint comes with all the necessary tools to modify the textures and
apply them to your aircraft. As you make changes to the textures, the
results are instantly displayed in vivid 3D, exactly as you’ll see them
in the Flight Simulator. Working like this, you’ll complete the repaint
in record time.

FS Repaint has many unique features that make the repainting of your
aircraft very easy and intuitive. Among them are:

Real time visualization of the 3D model as you repaint.
Up to four 3D windows for simultaneous views of the aircraft from
different points of view.
Feature-rich built-in texture editor.
Support for several major external editors, for those of you who don’t
want to use the built-in editor.
Ability to visualize the model in day and night conditions.

You can download  the demonstration version or purchase FS Repaint from
the official program’s website at http://www.fsrepaint.com