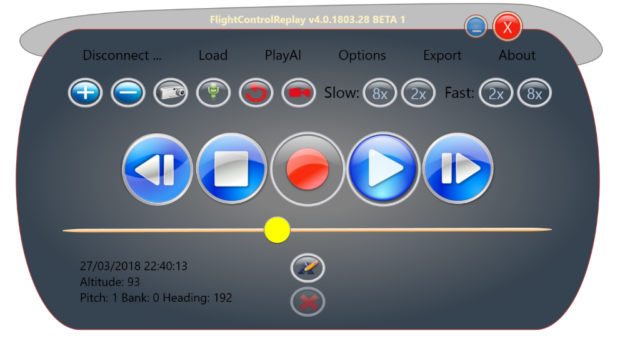 With the latest update version 4 for FlightControlReplay tool by Fabio Merlo, several new features have been introduced :

After a lot of months of analysis and requirements collection from actual Users and from Beta test team,  I m proud announce new major version of FlightControlReplay Professional Edition.

This FlightControlReplay v4 version use the last technology of internally developed engine SimFramework that it brings a lot of new Features that help all customers to record, play, analize, Re-Live a moment .

– Re-Live InstantReplay. User while flying, using FlightControlReplay in InstantReplay mode, can go backward for last 2 minutes of his flight and if he want , he can RESUME HIS FLIGHT FROM ANY YELLOW SLIDER POINT simply pushing Stop Button.  (Below a screen)

– Rendering Video (Alpha). User can start Video Render pushing dedicated command bar button. In that way FlightControlReplay starts video capture of Simulator Main Camera View. At this time this feature is in Alpha stage. Video render creates an AVI file uncompressed in Windows User Pictures folder, named with a TimeStamp of start video rendering. In Options Dialog, User can change FramePerSecond of rendering (15-30) and Quality recording percentage (10-100). FILE AVI IS UNCOMPRESSED (ALPHA) AND CAN BE VERY BIG. This feature can be very useful for video makers used both with “PLAYMODE SIMULATION RATE” feature.  NEW with v4

– In-Game Dynamic Text during Replay. User can write Notes at any point in a Replay Flight loaded in FCR using Dynamic Text buttons that appears below Yellow Slider when User loads Flight Recorded. At this manner User will able to pause Flight Recorded at a custom point into timeline and clicking DynamicText edit button or delete button User can add , modify or delete notes.  This Notes will be visible in FCR User Interface and also in Simulator playing Replay Flight. Dynamic Text can be customized via FCR Option dialog (Show duration in Seconds, Text Type and Text Color). (Below a screen)

– PLAYASAI (Alpha Optimized using FlightControlReplay P3DX Enhanced Native version). User can choose and play your preferred Recorded Flight as AI Traffic. You have all options available that you already have in standard playing mode,  change simulation rate on the fly or use User Interface Yellow Slider for choose exactly where your AI Traffic can start his flight. You can manage more than one recorded flight as AI Traffic using more than one instance of FCR addon at the same time. NEW with v4

-MAJESTIC Q400 ENHANCED SUPPORT User can Record and Play Flight Situation also with this fantastic plane! Thanks to Majestic