Robin Hood Airport Doncaster Sheffield, ICAO: EGCN, is an international airport located approximately 3.5 miles southeast of Doncaster in the United Kingdom. The airport’s history can be traced back to 1915 when it was originally opened as Finningley Airfield for the Royal Flying Corps. It would go on to be used by the RAF and be known as RAF Finningley airbase. In 1996 the airbase was closed and then three years later a private company, Peel Holdings, purchased the land and the former airbase was transformed into what is now known as Robin Hood Airport Doncaster Sheffield.

The airport has a single runway; 02/20 @ 9,491ft long and 197ft wide. This unusually wide runway can be attributed to its earlier days as an RAF airfield when it housed long range nuclear bombers. The runway’s dimensions earned it a spot as a designated Space Shuttle emergency landing site.

The scenery coverage area includes the airport proper and a very narrow strip around its perimeter. The screenshots clearly show that the differences between the FSX default and the UK2000 versions of Doncaster Airport are quite dramatic. This product is available for both FSX and FS2004.

The installation process is straightforward as most are nowadays.  You run the installer executable file, enter your product keycode, choose and confirm the installation path and let it continue. As the final step the scenery is added to the FSX scenery library.

During the installation process you will be presented with a screen that allows you to make some scenery configuration choices. 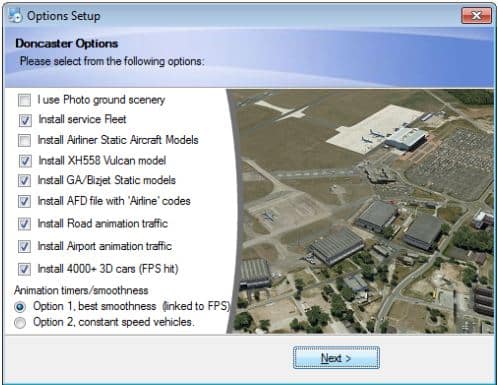 The package includes a single seven page PDF document that serves both the FSX and FS2004 versions of the addon; the document is concise, easy to understand and very helpful. It covers such pertinent topics as display settings and the “Doncaster Options” page along with other subjects such as airport history and how to do an uninstall.

There are no charts included but they are easy to obtain on the internet.

Ground textures are created from high resolution photo textures. This gives a very crisp, clear base for the entire scenery coverage area. Using photo scenery as a base allows us to see lots of ground based details. It also has the potential to create its own problems, most obvious being the presence of objects in the photo textures that haven’t been recreated with discrete objects. The area where that problem is most visible is with the large parking lot in front of the terminal building. Fortunately they give you the means by which you can minimize it to the point where it is negligible. You have the option to install 4000+ 3D cars via the “Doncaster Options” screen.

Volumetric grass is also added further enhancing the visual experience when taxiing on the ground.

Hard surface textures were quite impressive clearly showing the effects of aircraft traffic and the elements.

The way Doncaster is laid out the majority of its buildings are concentrated in the north west quadrant near the end of runway 20. It is here that we find the terminal building along with several large hangars and some other smaller buildings. Staying on the same side of the runway but moving down towards the southern end are the engine test facility and the fire training ground. Across on the other side are the control tower and fire station.

The developers of this scenery have utilized high quality imagery along with the addition of 3d structure elements and objects to recreate the various buildings. Overall they look quite realistic even when examined at close range. Their use of these images lets us see and appreciate lots of the surface details and it also means that we can see how age and weathering have affected their appearance. A few things stand out when looking at several of the buildings; the large glassed walls on either side of the main terminal and the supports on either side of the main openings for the large hangar doors. Other details that were visible included stair railings, wall mounted ductwork and exhaust stacks  on the control tower. At a small airport such as this I think that adding all of these types of details is important.

Several of the buildings have irregular roof lines; the main terminal, the large hangars north of the terminal and the Ramada Encore Hotel. Each is different and those differences are clearly visible.

Even though an airport’s larger structures tend to dominate the landscape there are some smaller ones that, because of the work the developers have put into recreating them,  deserve to be recognized. A good example of this is with the security checkpoint that is located just south of the RFEA (Regular Forces Employment Association) building. Some of the features include security lift barriers, metal railings and gates.

They’ve augmented the visuals of their structures by adding extra discrete objects which is good, but I feel that they could have done a bit more with respect to the roof tops. An example of this would be with the RFEA building, the image has shadows where in reality there should be objects such as ducting and vents.

In addition to the buildings at the airport they’ve also modelled some of the structures that are adjacent to it. These include the Ramada Encore Doncaster Airport Hotel and the Hill House school. The same techniques used to create the airport buildings were used with these.

The airport has been populated with high quality objects and vehicles throughout. What they’ve added works hand in hand with the other visual elements; the structures, ground textures and animations. They help bring the airport to life and to reinforce the convincing visual experience. All of the objects necessary to support the day to day operations have been included.

In addition, they’ve also included some optional scenery elements that can be enabled during the installation process. You will have seen the “Doncaster Options” screen. It is on this page that you were given the opportunity to install these additional objects. You can add some static aircraft; the XH558 Vulcan jet plus some GA/Bizjets. They are great additions as they don’t interfere with any animated traffic.

Here is a screenshot of the large airport parking lot with the 4000+ 3D cars option selected.  Although they flag the option as causing a hit to your FPS I saw no real loss in performance when I chose to enable this.

My only negative comment here is aimed towards the flat people that they continue to place in their airport sceneries. They are not anywhere near the quality of the other objects included, fortunately they are few and far between.

The scenery has a number of animations including custom road and apron vehicle traffic which are selectable via the “Doncaster Options” screen. There are also a few others such as smoke that can be seen coming from several chimneys and an animated aircraft marshaller at gate 4.

The quality of this addon at night was just as impressive as it was during the daytime. The look was very realistic with great lighting effects making night flying at Doncaster a very enjoyable experience. Light effects were not overdone, the light projected from both ground and overhead lighting had a diffused look which made them quite realistic. An interesting effect that they include is illuminating the ground in the immediate vicinity of the light fixtures. Building lighting was also well done; besides the usual windows being lit up and exterior wall mounted lighting the large hangars whose doors are open have their interiors lit up. Again it was done in such a way that it looked very realistic.

I consider UK2000 to be in that group of top tier scenery developers with whom you can rest assured that the product you are purchasing has been created to a very high standard. No product is perfect and this one has some minor issues such as those flat people they insist on putting in their airports. Overall I really enjoyed this product and feel that it would make a fine addition to anyone’s stable of British airports.

Installer: Very good. Simple to use.

Extras:  Animated road and apron traffic. Scenery is configurable via the options page.

Gary Summons’ sceneries use photoreal backgrounds, so will overwrite landclass based scenery such as Orbx. If you are an orbx user, you can check their forum which has a large section about compatibility with other products.

UTX EU does not contain airports, just modifies default ones when absolutely necessary. Therefore there is no clash.

Thanks, it’s a nice review of a nice scenery. Too bad that no mention has been made about compatability with UTX EU, photoscenery and the recently released OrbX EU ENG scenery.

Gary Summons’ work is amongst the very best there is and this airport will not dissapoint you if you buy it.