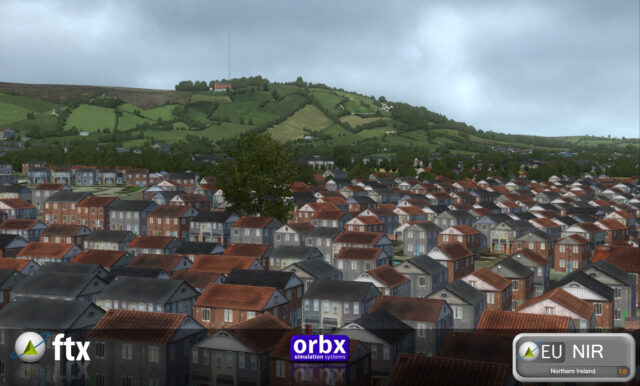 The counties of Northern Ireland occupy the North Eastern part of the island of Ireland and have a troubled past that still brings the country to the news headlines – usually in a poor light.

Politics aside, ‘Norn Iron’ is a primarily rural country, with one significant built up area around Belfast and Lisburn, plus a number of smaller towns and cities from “Stroke City” (Derry/Londonderry) in the North down to Armagh  and Enniskillen in the south. It is served by three  primary commercial airports and a significant number of smaller ones, all of which can be found in what is probably Orbx‘s smallest area scenery for your money to date, although it does extend slightly across the Southern and Western borders into Eire as well.

The scenery includes a photoreal area around the World Heritige Site of the Giant’s Causeway on the North Antrim coast and your editor kind of hopes that it’s put his wife’s home town of Antrim in the right place at last – something which every previous FS add-on has spectacularly failed to do!

You can find out more by clicking here.