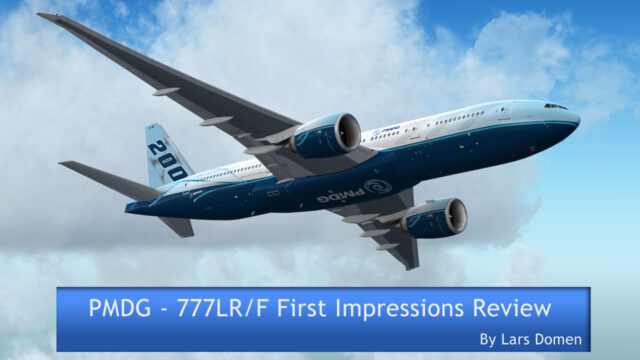 I’m going to start with a disclaimer. This is a ‘first impressions’ review. Please keep this in mind when reading this. I’m nowhere near familiar with the 777, neither the PMDG one nor the real world one.  And despite having done several very interesting test flights, I’ve only completed a few full point-to-point flights so far, one of which being the tutorial flight. A more extensive review will come later, when I’ve done some more flying, and probably after at least the first round of fixes are released by PMDG. That said, let’s get on with it! 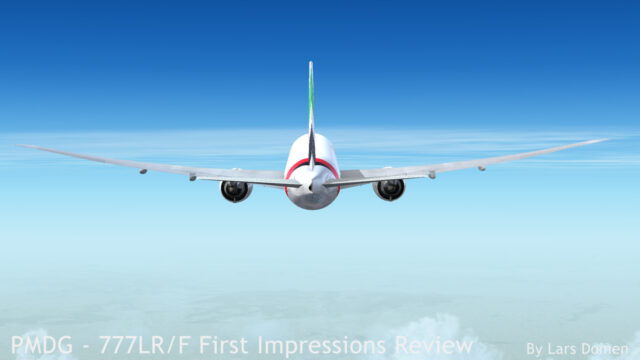 I’m not really going to go into detail about the installation here. A company like PMDG has too much experience to make mistakes at this level. I’ll just say that the download is almost 800MB large, and includes just 2 liveries (more can be downloaded later). So you will need some decent free disk space to install this.

On thing I want to mention here, is the price. It is not low… At $89.99, this is a very expensive product. But do read on to see if it’s worth that kind of money to you.
Oh, before I forget, it is FSX only! 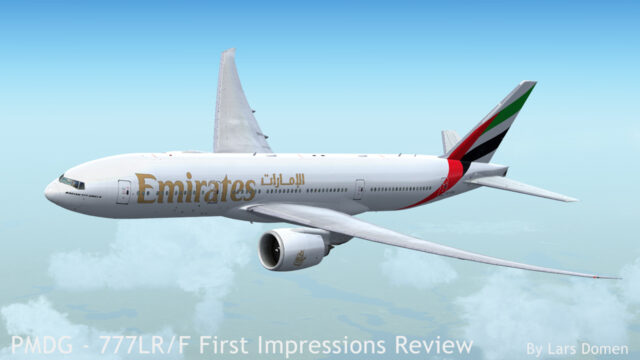 Personally, I’ve never considered the 777 to be a beautiful aircraft. I know many, many people disagree with me on that, but for me it just doesn’t do it. It’s an incredibly impressive machine, but I don’t like how it looks under some angles. What I like least, is that 767 front section bolted to a much wider fuselage, and that strange tail cone. But of course, that’s just my personal opinion. It does have beautiful, impressive wings!

That little personal rant out of the way, I’m truly impressed with what PMDG did with the exterior of this product, in both the 777-200LR and -F versions. I haven’t put it next to any technical drawings of the real thing, I trust PMDG did that themselves. But as far as I can see, the general shape is spot on! Even more impressive is the amount of details they managed to put in. Of course, this can best be seen on the landing gear. The amount of detail there is simply breathtaking. But it’s more than just the gear. I really like the fan blades, for example. And I really like how they look when spinning! This probably is the first add-on that makes me think: ‘wow, those fast spinning blades look really nice’. And they even managed to put in those see-through windows and a believable cabin (for the exterior views). I really like it!

Another aspect that was already very good in the NGX, but is even better in the 777 is the lighting. Landing and taxi lights light up the environment, strobe and navigation lights also light up the ground… It all looks very good. 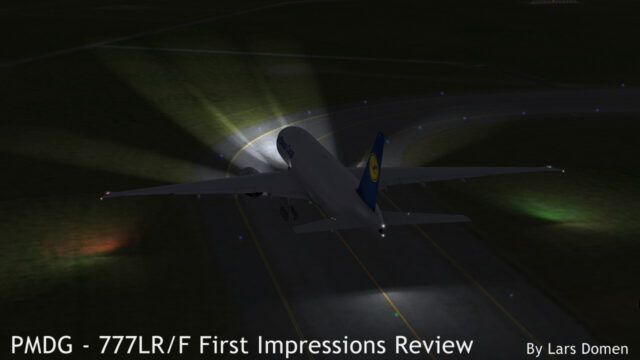 On the downside, some of the animations don’t look very smooth on my PC. I’m going to have to look into it a bit more to be sure, but it looks like the doors and landing gear move a bit jittery on my pc, even though frame rates remain good. I’m definitely looking into this for the more detailed review that will come in the future. 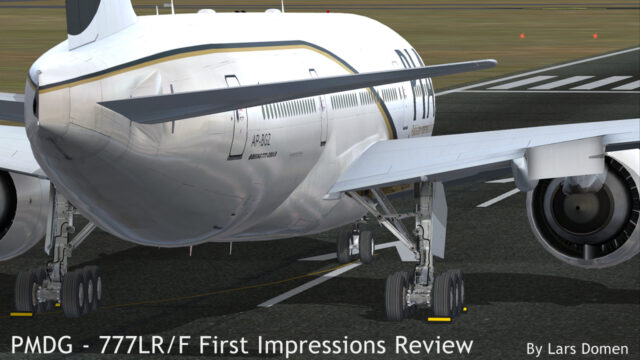 And then there’s the exterior textures. Now, if you read my NGX review, you might know that’s the one thing I didn’t like about the PMDG NGX 2 years ago. Good, but not that impressive on that aircraft. But this is something else. Great and definitely impressive! PMDG certainly upped their game here, for which I’m very happy! Congratulations PMDG!

The exterior textures are clear and sharp. Of course, you can’t expect them to remain perfectly sharp when you go counting rivets on such a huge body, but for anything but unreasonably zoomed in views, the resolutions is great! The amount of details is great, and the way they painted them, not too ‘in-your-face’ but not too subtle either is fantastic. But what I like best, is how they managed to make it all come together. All different layers and styles FSX textures can use, work together perfectly. It really makes this add-on come to life if you pan around it.

I’m really impressed by the way PMDG took the one aspect I didn’t like of their previous product, and turned it around the way they did! 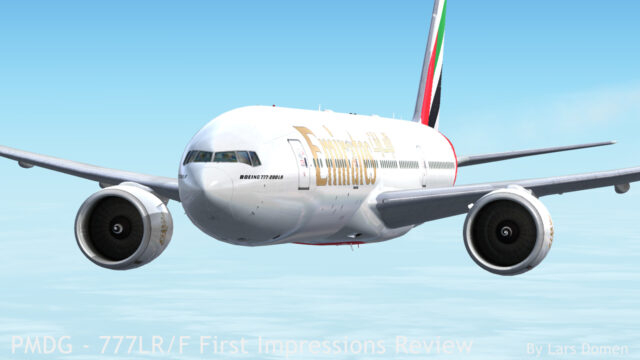 Again, amazing modeling, great texturing. A lot cleaner than the NGX cockpit, which some people will like. PMDG has really brought the feel of the 777 cockpit into FSX.

What really impressed me here, are the animations. They’re smooth, they’re efficient, and there are thousands of them! And the attention to detail is, again, stunning. You can even see the mechanical shutter in the pushbuttons move over the label! 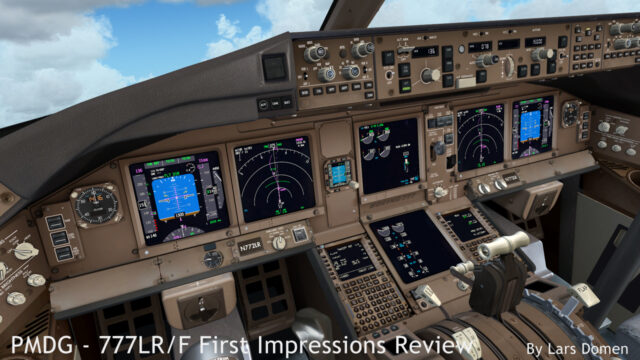 Another thing I want to call attention to is the lighting system. Every light that can be dimmed in the real aircraft can be dimmed in this simulation. It looks  great, but best of all, PMDG really paid attention to the edges between different lighting regions. So you will not get a hard edge between something that is lit, and something that isn’t. The results is a very realistic, very good looking cockpit that makes you want to fly at night! 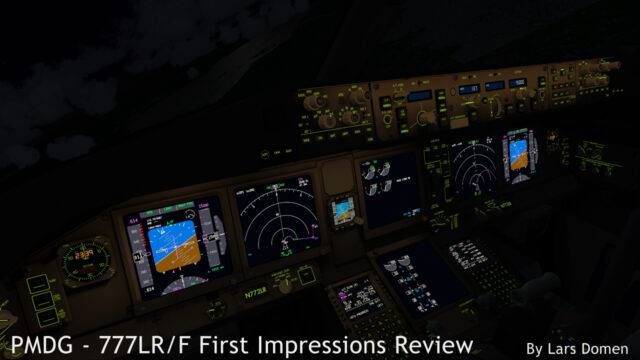 PMDG has said for years that the 737NGX was the last PMDG aircraft with a full 2D panel. And they stuck to this, so you will not find that kind of panel in the 777. However, there are a bunch of useful 2D popup panels. There’s one for each CDU, one for the MCP with the captain’s EFIS panel, and one for the MCP with the first officer’s EFIS panel, so you’re set whatever side you prefer. And there’s a popup panel for the radios and transponder. Finally, there’s a popup for every screen in the cockpit, even the standby instruments.

At this moment, I’m not very well suited to talk about system. As I said, I’m not familiar with the 777. But it’s a fully-featured PMDG product, so expectations are high. And indeed, from what I’ve seen so far, the quality and attention to detail concerning the systems built into this add-on is staggering.

Some nice features that made a repeat appearance from back in the NGX days (or even earlier) are CDU menus to control everything, so no need for external load managers or popup panels that pause FSX. Also seen before: panel state saving/loading, progressive and selectable failures, aircraft and simulations options… And I’m happy to see all of them!

And then there’s some new stuff, that we haven’t seen before. A great example here is the ground operations feature. This lets you choose an amount of fuel to upload and a planned turnaround time, and that’s it for you. Everything from now on goes automatically: opening and closing of doors at the appropriate times, the uploading of fuel at realistic rates, and even pushback if you want to.  A very nice feature that I haven’t fully come to grips with…
And maybe the most remarkable example of a new feature is the auto-time compression. It is an adaption of the time compression standard in FSX, but so much better. If you use it (and nobody forces you to if you think this is too unrealistic) it will slowly increase the simulation rate up to a maximum you can choose, and will dial it back for critical phases of flight where time acceleration might otherwise wreak havoc, like step-climbs, turns, turbulence, and failures (if enabled). It’s a great feature, that enables you to fly those extremely long range flights, even if you don’t have 10+ hours to spend behind your PC. 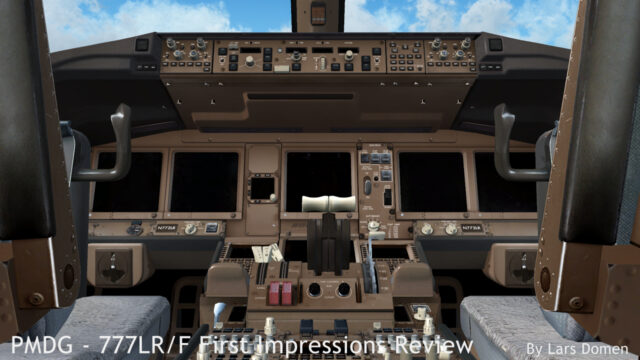 I really, really hate using all these superlatives in this review, but I’m going to have to do it again. The exterior sounds on this aircraft are very good. Realistic, well balanced,… But it’s in the virtual cockpit that the magic happens. PMDG did something new here, and recorded several different sounds for every switch. A hard press, a soft press, a fast or a slower flick of a switch… And the programming they did uses all these different sounds, so if you click the same switch multiple times in a row, it will not sound exactly the same each time. I’m really surprised by how amazing the effect here is. How such a seemingly small detail can make such a difference. Great work again PMDG. 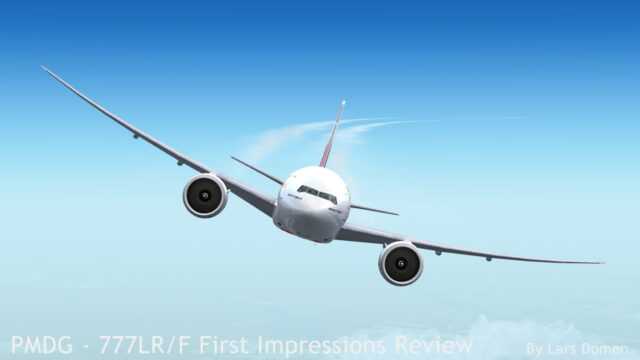 The ‘big surprise’ PMDG kept hinting at during development is this Operations Center. It has nothing to do with operating the aircraft in FSX, but it is an amazing addition nonetheless. The Operations Center is an external utility that acts like a central hub for just about anything you can’t do in FSX itself. It has basic information about PMDG and about the supported products, a livery manager per product, links to all manuals, and for the 777 even an automated livery downloader. While the Livery manager that came with the NGX was useful, this is on yet another level. No more downloading repaints from the PMDG website, now you can just click which repaint you want, and this utility does everything else. It even shows which repaints need updates. And of course it still can be used to install 3rd-party repaints you downloaded on other websites.

This is not a low-detail, low systems, default quality Cessna 172 or something like that. This is a very large, very detailed aircraft filled to the brim with high quality systems and sounds. But that said, I’m pleasantly surprised by the performance I’m getting here. Frame rates remain at, or even slightly above, the levels I get when flying the NGX. Only loading the exterior takes longer, but that’s something I can live with, considering the quality. The virtual cockpit is loading about as fast as the NGX is for me. Again, I’ll be able to say more on this when I test some more. 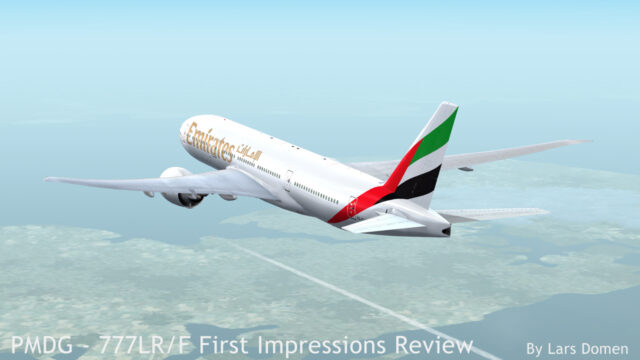 Alright, this turned out a bit long for a ‘first impression’ perhaps… And I used a lot of superlatives, more than I like myself. But really, upon first impression, it is that good! So, a very expensive product. But, if long range, airline-style flying is your thing, the PMDG 777LR/F might actually be worth that kind of money. Of course, there are some small problems and bugs here and there, but PMDG is already hard at work fixing those. I’ll be testing and flying more, and will write a more detailed review later! 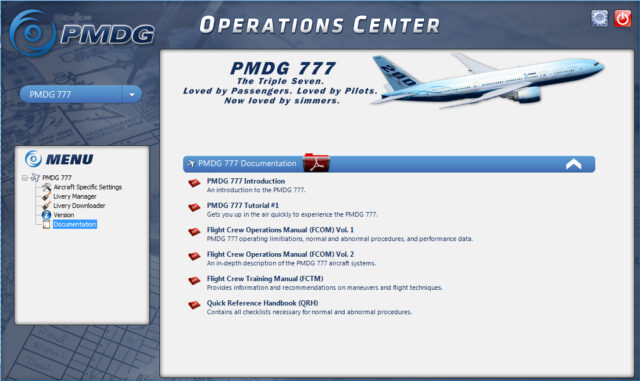 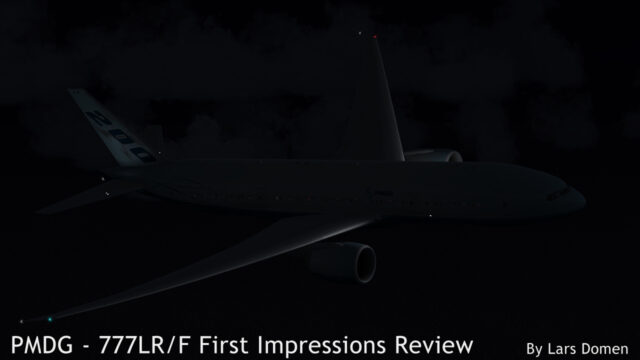 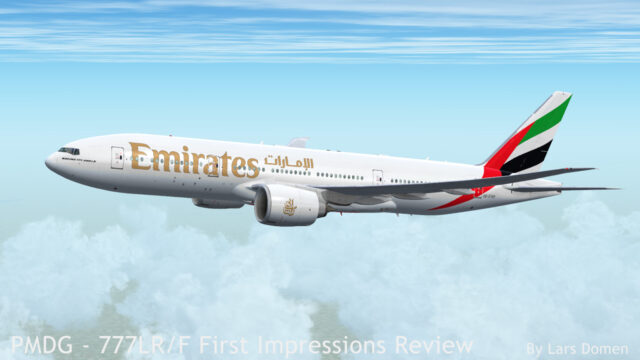 Check out the autothrottle problem if you use FSUIPC

Searching the PMDG forum, there seem to be some ways of programming your throttle controls in FSUIPC that cause problems with the 777 indeed.

I normally don’t use FSUIPC for my controls, but use FSX itself for this, so I haven’t experienced any problems so far. But I’ll keep this in mind.

I’ve barely scratched the surface of what this package is capable of, but even with a very tight budget these days, I don’t begrudge the cost of this one at all. It’s a very, very, good package and has taken me back from flying only GA and short haul back to oceanic crossings.

It all sounds good to Me, I’m retired, and I plan to Purchase it. I’m very impressed with The Review, So I’m sold on it, it may be one of the exspensive Sims I have, but I believe its well worth it!