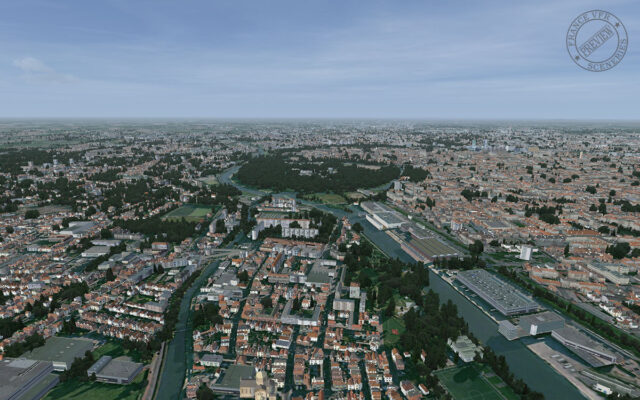 The French studio still achieves new developments and performance with their 3DAutomation technology found in their VFR collection sceneries.

VFR Nord Pas-de-Calais will depict the Northern region of France, with hgh definition mesh and photoreal textures, many buildings, trees and landmarks. It will also include mega city Lille – close to Belgium – mixing custom 3D buildings and numerous Autogen for downtown and suburbs, a very large area with an unprecendented amount of buildings in such area (+260’000), with low impact on framerates. Future development should even improve that again with next generation of their 3DA logic.

Okay I was wrong. There is a new version of NPC, it just hasn’t been released yet.

Sebastien, as you say, Nord Pas-de-Calais has been out since 2012, and this is the VFR product I have had for many months. When I checked the France VFR web site, this is the only one for sale. However, I see there is a Version 2 of Alsace, which is the one in the link that you suggested I check.

I am a bit confused. The Nord-Pas-de-Calis VFR region has been out for years. I already have it, bought it several months ago.

Hello ! What you have is not a “VFR series” product. This series has started in 2012 and your Nord Pas-de-Calais photoscenery exists since june 2010. It’s “only” photoreal terrain, aligned FS airports with the aerial views, coastlines, water adaptations… The VFR series have the following differences with your actual product : new High Definition aerial views, Autogen + custom 3D landmarks, 3DAutomation technology enabling 1/ a very dense quantity of buildings and trees 2/ a wider variety of buildings and trees species to depict the real life vegetation of that region. See the French review at simFlight here :… Read more »

Got it ! I only revised france vfr sceneries at simmarket to answer you, but on their website the information is more complete.
Then the difference between yours and this preview is mainly the inclusion of 3D Automaation technology, like Alsace VFR when it got upgraded to V2.