Yesterday saw the coming together of some of the major names in the industry, at the RAF Museum, Cosford, to put on “Flight Sim 2013” – jointly hosted by Just Flight, Flight1 and in association with PC Pilot magazine.

Alongside the hosts, other big names such as Aerosoft, Saitek, Mutley’s Hangar, VRInsight and Tim Arnot, author of Plan G, were presenting their wares (and in Tim’s case, debut novel!), alongside developers, VAs, FS user groups and more.

Two things were conspicuously on display – Aerosoft’s Twin Otter featured on a number of displays, including the landing competition I’ll mention again shortly and a number of developers, particularly Aerosoft and Flight1, were advertising their moves towards the X-Plane market. F1, in particular, were demonstrating to users the differences between XP and FSX, but that the same hardware could easily be used for both, using XP10 64-bit and their photoreal UK scenery package for XP10. JustFlight have recently announced a move to support Ikarus’s aeroflyFS, with a number of upcoming downloadable add-on aircraft for the PC version of the sim, so that was on display on their stand. 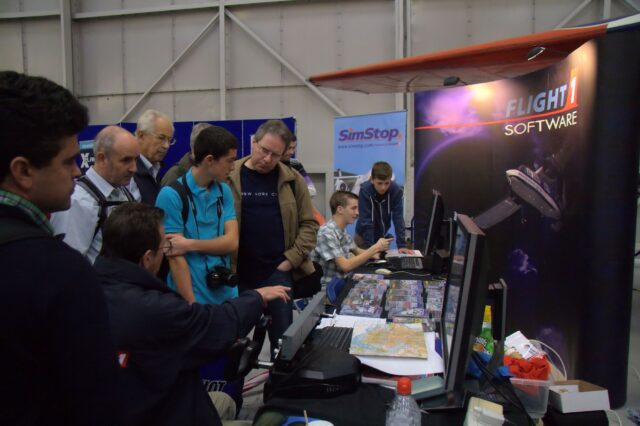 The setting was exceptionally fitting for a flight simulation show, amongst the transport and trainer aircraft of the RAF Museum’s Hangar 1, indeed there were some particularly good matches, such as JustFlight’s stand between the nose and wing leading edge of a deHavilland Comet airliner, which might look familar!

The majority of the stands were accessible by walking past the 1:1 scale Airfix Spitfire Mk.I created by James May of Top Gear and local school children, for a TV series a few years ago.

Bob Sidwick, of RC Simulations, whose Birmingham based shows were a mainstay of the British FS community for many years, had set up shop alongside the German V weapons display and was getting significant interest in his own designed and built hardware, at the opposite end of the hangar, while the Argosy transport and CASA 352L (Ju52/3M) provided the closest backdrops to a row of stands including a demonstration of JustFlight’s upcoming Canberra, the landing competition (which also spent some time demonstrating A2A Simulations’ Accu-Sim C172 Trainer) and Alex Ford’s collection of flight sim memorabilia, which had large numbers of visitors exclaiming ‘Good grief! I’d forgotten I ever had that! Brilliant!” and similar words. VFR Poland were also present in this area, providing visitors with codes for some of their products… if you need more, of course, you can get them here. 😉 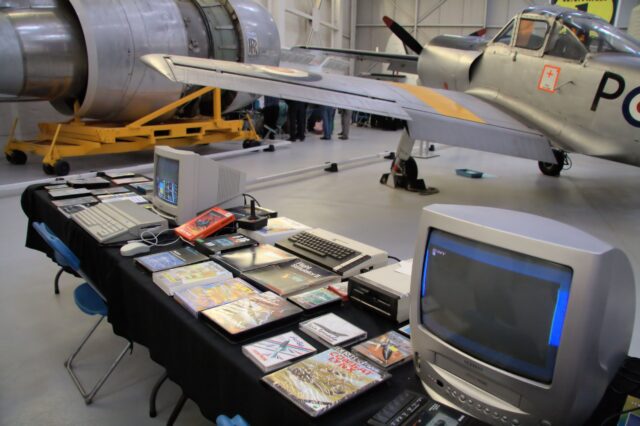 Alex Ford’s collection in a rare moment of calm

Of course one of the primary reasons for these events is to meet like minded people, or friends that you have spoken to over the internet on many occasions. In this instance, it was a friend that I haven’t spoken to for ages, who introduced me to someone I have spoken to on many occasions and never actually met. Thanks to Adrian, I can now say that Pete Dowson, whose support forums are probably the busiest area of the simFlight network, is no longer just a picture in the corner of forum posts, but also an extremely personable gentleman – nice to finally meet you Pete! 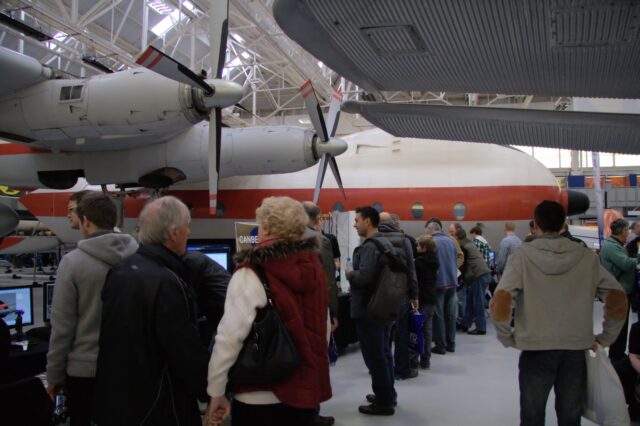 The hardware vendors were present, as well as the software side, with Chillblast having a very popular stand, adjacent to a 737NG sim on a panoramic projection screen. For those looking for additional hardware, RC Simulations were present, as already mentioned, and the Flightstore stand was several rows deep in people browsing or buying. Saitek and VR Insight were either side of the Aerosoft stand, making for a very busy area of the show. By the end of the day, there were a lot of gaps on racks and displays which had earlier been filled with stock. 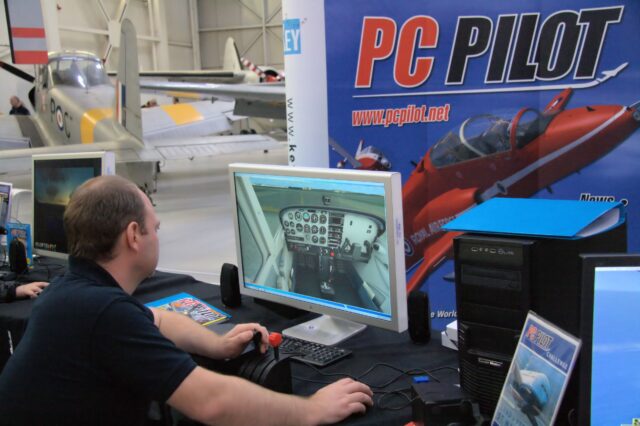 PC Pilot’s Richard runs up the A2A Accu-Sim C172, before letting the general public loose to try and break it!

So what about the competition I mentioned earlier? Well, every show has to have one – it’s a rule, apparently – and this time PC Pilot were responsible for providing the entertainment. There were actually two – an opportunity to land a 777 at Fly Tampa’s Princess Juliana International, St. Maarten, with a drawn prize for those who succeeded, while a second PC was in use flying the Aerosoft Twin Otter Extended into another Fly Tampa airport – Saba, also from the St. Maarten Complete pack –  for a smaller prize. Your editor couldn’t resist trying the latter having missed out on the former and managed it two out of three approaches, but already had the prize. Oh well! 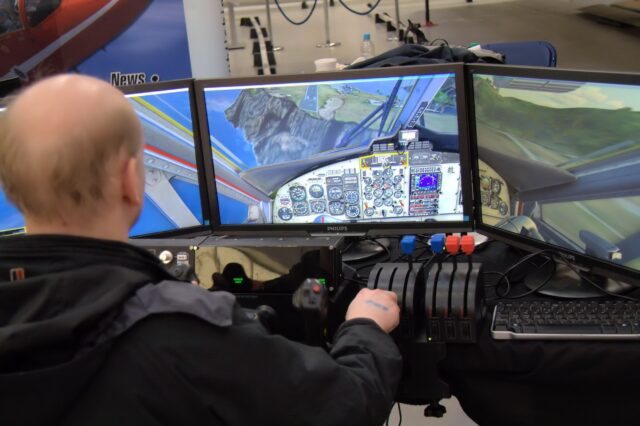 My lack of hair reflecting the camera flash, on one of two successful approaches to Saba.

The final highlight, which unfortunately I missed as I was deep in conversation with one of the show organisers, was a presentation of JustFlight’s upcoming Air Hauler 2 project by its developer in the museum’s Cold War hangar. If anyone did see that and would like to add their thoughts, please do so using the comments box at the end of this article.

All in all, from a visitor’s perspective, the show seemed a great success. It was well organised and presented, busy but without being overcrowded and set in an excellent location, with, as one of the organisers put it, lots of happy faces and most of them carrying FS branded carrier bags. Hopefully, the show will be a financial success for those displaying and attending as well, so they will repeat the event in the future. It certainly has the scope and promise to be a worthy addition to the FS event calendar.

Thanks to the organisers, as well as all those displaying and attending, for making the event a very enjoyable day out.

show was over priced for what little was on offer….

Arrrrgh! I can’t believe I missed the show by a single week! Looks like it was a great gathering. Thanks for showing me around Cosford the Saturday prior, Ian. What a fantastic museum.