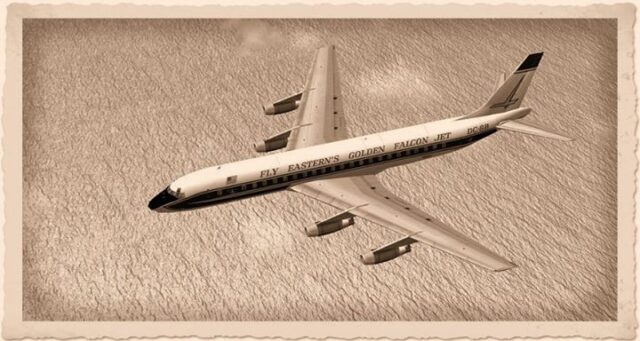 It’s been quite some time since we heard from Historic Jetliners Group, so it was nice to receive a press release yesterday, detailing the latest updates and releases to their ever growing fleet of freeware classic jets.

NEW RELEASES FROM HJG …. AND PREVIOUSLY UNANNOUNCED WEBSITE UPDATES
It’s been quite a while since HJG (Historic Jetliners Group) last released a PR statement.
Some folk might be excused for thinking that nothing much has been happening within the virtual classic jetliner world of HJG …. BUT …. as is often be the case looks can be very deceiving because “THE REALITY” is  “QUITE DIFFERENT” …..
3 website updates have actually been released by HJG between September 2013 and January 2014, but, personal commitments within this period have prevented my customery acknowledgement of these …. until now …. and todays latest releases per this/HJG’s 2nd website update for 2014.
Throughout the above period …. and as of up to todays releases …. well in excess of 130 new and upgraded files have been released by HJG.
Among these files are many new and historic liveries/textures for HJG’s classic B707, B717-200, B727 (by Vistaliners), C135 (series), CARAVELLE (by AFG) DC8, DC9, MD80/90, and L1011 TRISTAR flightline …. and which join its other long established simulations for the B367-80, BAe 146-300/RJ100 (by Jon MURCHISON/ARNZ), CV880, CV990, and CONCORDE (by FS France Team).
Noteworthy among the virtual aircraft included within todays website update are each of the following new and upgraded files :-
* The first installment of HJG’s new AI Aircraft flightline (by Paul HAAK) and which features the DC8-62, -63, -71, -72, and -73 …. for starters !!!!
* HJG’s  new MD82-SF and MD83-SF freighter aircraft (by Paul HAAK …. and with thanks also to Nicholas BOTAMER). Each of these new 3D models features an animated forward fuselage port side maindeck cargo door and FDE suites that are appropriately customised for freight specific loadings.
* HJG’s upgraded L1011 TRISTAR Aircraft Base Packs, Panels, and Gauges/Core Files packages (by George CARTY).  These upgraded files now include a reworked and much more accurate multi-mode AP which features an auto-land system with the ability to fly any ILS/GS approach and then flare the simulation for “a fully automatic and hands-off landing” …. among a number of other functional and cosmetic improvements also !!!!
For more information regarding todays, as well the 3 past unanounced, HJG website update/s then please refer to the following forum announcement/s :-
APRIL 2014 WEBSITE UPDATE
http://tonymadgehjg.proboards.com/thread/7050/website-update-april-16th-2014
JANUARY 2014 WEBSITE UPDATE
http://tonymadgehjg.proboards.com/thread/6876/website-update-january-10th-2014
NOVEMBER 2013 WEBSITE UPDATE
http://tonymadgehjg.proboards.com/thread/6763/website-update-november-13th-2013
SEPTEMBER 2013 WEBSITE UPDATE
http://tonymadgehjg.proboards.com/thread/6658/website-update-september-17th-2013
Behind the scenes work continues, at HJG, on a number of “NEW PROJECTS” that are currently slotted for future release.
Without a doubt …. “IF” one hasn’t, yet, flown an HJG simulation. then, one’s certainly missing out a large slice of some the very best classic jetliner “FREEWARE” currently available for MSFS.
HJG is hosted by SIMVIATION.COM and located at the following website address :-
http://simviation.com/hjg/
Mark CRANSTON
HJG
April 15th 2014
0 0 votes
Article Rating