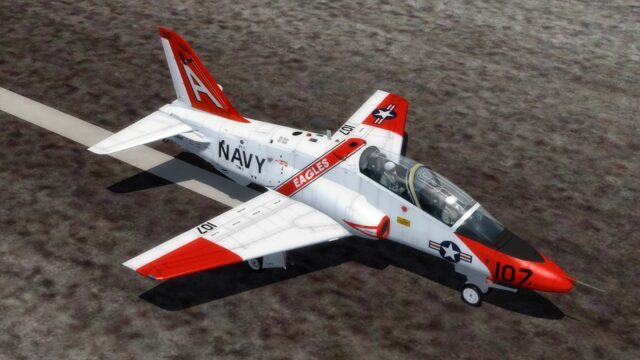 Over the weekend, Dino Cattaneo released what may be the final, version 2.70, update for his freeware FSX/P3D Boeing T-45C Goshawk naval training aircraft.

Over the years since the release of the Goshawk, it has seen many, many iterations and improvements and is one of the best pieces of freeware available for the sim platforms. According to a blog post on Saturday 20th September, however, Dino has announced that with other, newer, projects dominating his time, the little Goshawk is considered at its final version… Probably.

According to the blog post, which follows an earlier announcement, “Specifically, and tentatively, this is meant to be the last and final update to the project. Of course it is possible that I have made some mistakes and introduced new bugs… so there may be a fix if there are major mistakes.”

With the S-3 Viking recently joining Dino’s release list and a number of work in progress models, we think the entire hobby more than appreciates the work that Dino and others have put into their projects, including, but not limited to, the T-45C.

All Dino’s releases can be downloaded vis his India India Alpha Foxtrot Echo blog, which can be found here.

Which link, Johan? The links here work. If you’re referring to the Goshawk’s link on Dino’s blog, it appears that it has been too popular and has exceeded his bandwidth allowance… Possibly time for a donation via his PayPal link to fund a better download location? 😉

The aircraft has been uploaded to the primary freeware library sites as well (I got it from Avsim), so you can get it from those instead.

(Or, if you prefer; 哪个链接，Johan？这里的链接工作。如果你指的恐龙的博客上的苍鹰的链接，它将显示已太受欢迎，并已超过其带宽津贴……通过他的贝宝链接基金更好的下载位置的捐赠的可能时间吗？;)

Thanks Ian, I wasn’t aware one could download the Goshawk from Avsim as well. This is freeware that puts more than one payware developer to shame. BTW, your English is impeccable, but your Chinese needs some polishing, or is it my Google Translate? 🙂 Which links , Johan? Here ‘s the link to work . Links eagle If you mean dinosaurs blog on , it displays already too popular and has exceeded its bandwidth allowance …… via PayPal link to donate his fund better position possible time to download it? ; ) This aircraft has been uploaded to the library… Read more »

Our Chinese colleagues are probably burying their faces in their hands and cursing the existence of translation pages, right now.