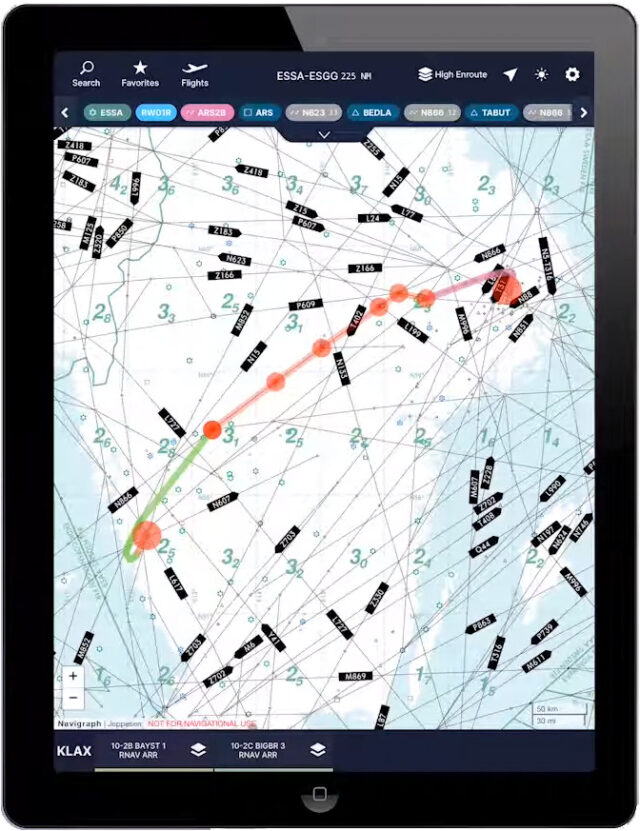 Navigraph is proud to announce a major update to Navigraph Chart for iPad, now available for download in the App Store via this link.

In this release (October 2019) we have included the ability to seamlessly overlay procedure charts on top of the interactive and scalable high and low airspace enroute chart. We have also built a procedure visualization which makes it very easy to find you way in and out of the airspace around an airport. This release also comes with an easy to use route calculator which finds the shortest path between airports respecting both North Atlantic Tracks (NAT) and Free Route Airspace (FRA) rules. You may also overlay routes on a topographic and political world map.

Navigraph Charts is an iPad app that offers updated Jeppesen IFR charts to the flight simulation community. Users need an iPad running iOS 10 or higher as well as a Navigraph account with an active subscription, both of which are available on the Navigraph website through this link.

A subscription costs EUR 8.30 per month (not including VAT) which is approximately USD 9.00.
Navigraph Charts can be used for free in a feature complete demo version which includes access the airports in Wellington, New Zealand (NZWN) and Brisbane, Australia (YBBN). In demo mode the enroute chart is restricted to the area between Australia and New Zealand.

– We recommend that you install Navigraph Charts on your desktop too. All changes you make to Flights, Favorites, and Pinboards are immediately reflected on your tablet. Conversely, you can export routes from your tablet into various flight plan formats on your desktop computer, for example P3D/FSX, XP11, PMDG, QualityWings, FlightFactor A320, IXEG 737, and more.
– With a current Navigraph subscription you can also access airport charts in the virtual Electronic Flight Bag (EFB) on the virtual flight deck of many addon aircraft.