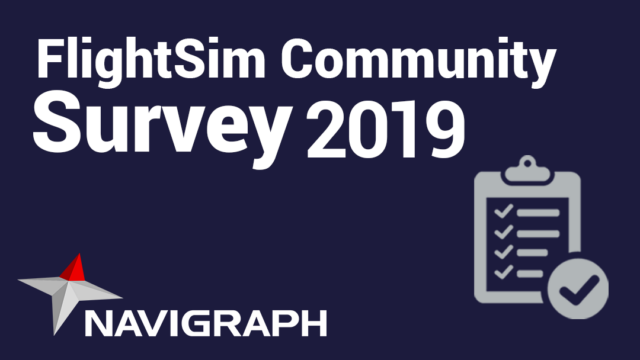 The large survey prepared and analyzed by Navigraph help the flightsim community to have a better idea of simmers preference, hardware equipment, or how do they select their add-ons. Enter the survey here.

During 20th of November to 2nd of December 2019 Navigraph is conducting a FlightSim Community Survey together with several major addon developers and organizations within the flight simulation community. The survey, the largest of its kind, aims to gauge the prevailing flight simulation trends and users’ requests for future development.

Like previous years, this survey has an emphasis on the major flight simulators such as Microsoft Flight Simulator, Lockeed Martin Prepar3D and Laminar Research X-Plane, but now also includes questions about simulators on mobile devices, combat simulators, and helicopter simulation. Furthermore, the survey has in depth questions regarding Virtual Reality and also goes further into investigating the users’ choices when selecting aircraft and scenery addons.

During the month of December (tentatively) results will presented on https://blog.navigraph.com but also by the addon developers and organizations participating to this survey to the extent they wish to do so.