San Diego International Airport, ICAO: KSAN, is a public airport located approximately 3 mi from downtown San Diego in California. The airport also goes by the name of Lindbergh Field. It was given this name in honour of Charles Lindbergh, in 1928, for several reasons. It was here that his aircraft, “The Spirit of St. Louis”, was designed built and tested. It was also from here that he began the journey that ultimately became the first solo transatlantic flight.

The airport has the current distinction of being the busiest single-runway commercial service airport in the world and the second busiest single use-runway in the world. Every day more than 550 flights take off and land from here and in 2011 approximately 17 million passengers used the facilities.

Installation was very straightforward. After running the installer executable it was a simple matter of adding my product serial number and selecting which flight simulator I was running. It is here that you will also be given the opportunity to make choices with regards to several scenery options. The installer also adds the airport to the FSX scenery library. 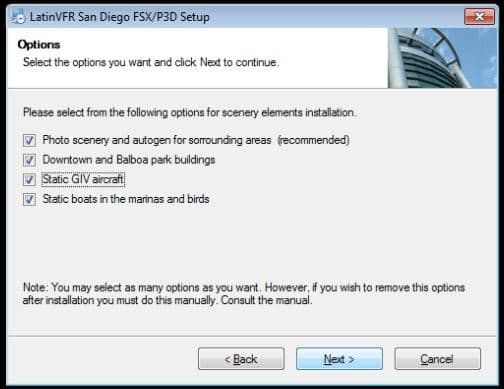 If you decide that you’d like to alter your choices, some of them can be done through file manipulation. There are details in the manual on which ones and how to go about doing it.

I noticed that after the installation was done there was no new program group created. So this means that if you want to gain access to the documents or any of the scenery files you will need to go to the newly created LatinVFR\San Diego_KSAN directory which is located in the FSX\addon scenery folder.

The product comes with a 12 page PDF manual plus a separate aerodrome chart.

The manual has pages dedicated to describing the scenery’s features, the history of San Diego Lindbergh Airport, airlines that use the airport along with their destinations, general flying tips, scenery element options and finally FAQs. It is an easy read and does contain some worthwhile information.

As far as airports go San Diego has a very simple layout with a single runway and a large passenger terminal as its two dominant features.

Here is a comparison of what you’ll see in FSX and after installing LatinVFR’s San DiegoAirport scenery.

The scenery’s ground base is comprised of high resolution photo images and high quality graphic textures.

The use of photo imagery textures certainly makes the ground look realistic but it is a double edge sword. They are great at higher altitudes and this is where they out shine all other ground texture types. Flying overhead you can see exactly how the area looks. Also the use of these images gives the developers an accurate base on which they can add all of the various structures and objects.  The problem with photo textures, and I see this in many airport addons, are the objects that appear in the images that have not been recreated as part of the scenery. Unfortunately that is something that is very much the case here, especially with the multi-lane N Harbor Dr roadway that is sandwiched between the airport and shoreline and some of the large parking lots. In both cases there are numerous vehicles in the photos but none in the scenery.

The textures used for all of the hard surfaces plus roadway overpasses were very good, they were detailed and looked quite realistic.

One of the things that struck me about this airport was how it seemed to blend in so well with the surrounding landscapes. It sneaks up on you as you make your approach. There are no tall structures and the colours used are muted or are earthy tones. Also there are relatively few buildings considering the fact that it is such a busy airport. This airport has lots of open space.

All of the included airport structures have been recreated with an eye towards giving the simmer a visually pleasing experience and overall I must say that they are very well done. They do include some intricate detailing and advanced shading and colouring techniques to give the structures a real world look.

I did see a slight problem however; as I took a close look it became apparent that many of the structures didn’t seem to be lined up quite right with the underlying ground textures. This is one of those problems that is not normally visible unless you are looking for this type of thing. It is not something that affects your flying but can detract from the product’s quality. If you look at the various structure screenshots you will see examples of this problem.

North of the runway going west to east are the fire station, cargo ramp and general aviation parking area. All of these buildings are very conventional in their design.

The passenger terminal complex is the largest building on the airport grounds and like many airports also the most interesting architecturally. The building is situated along the southern edge bordering on the Airport Terminal Rd. There are two terminals each with two concourses that jut out from the main building. Each of these in turn has jet ways through which passengers board their aircraft. The entire complex has been modelled in detail. Some of the visual features that stood out were the curved walls, roof top ducting/details and the skylights. Besides being the dominant structure it was also the scenery’s standout visual feature.

San Diego is undergoing an expansion to their terminal and this has been included. The basic design follows along the same lines as the remainder of the building with the exception of the large Sunset Cove area. It does however have a design feature that makes it noteworthy; its large curved glassed wall. It has been depicted in detail including the interior where we see several restaurants and a lounge area that has several sofas where passengers can view the apron.

Moving eastward from the main terminal there is a cluster of buildings; they are comprised of cargo hangars, administration buildings and the Commuter Terminal.

Overall I liked this aspect of the scenery.

The objects and vehicles that are added to the scenery are very good. Looking around I found that there was a good amount of variety and that they enhanced the visual quality of the overall airport. They even went so far as to include some static aircraft near the Landmark Aviation hangars and at the U.S. Coast Guard Air Station. Making an airport look alive is a key function of all these added objects and vehicles and they’ve achieved that here.

A few negative points however; I would have liked to have seen more in the way of vehicles parked in the large parking lots that surround the airport. Some of these lots look very desolate with the few vehicles that have been included. Perhaps having an option in the installer to populate them would be good. Another problem was with some shrubbery located north of the runway, that appeared as bright green X’s. Besides these two observations I was very happy with what they did in this regard.

The only daytime animations included are those native to FSX so they include flying birds, vehicle traffic on nearby roadways and finally boat traffic in the waters. Unfortunately the lack of custom animations has meant no apron traffic which negatively impacts the realism factor.

While flying around at night I did come across a rotating beacon located between the airport and marina.

The area immediately surrounding the airport was also given some attention by the developers. San Diego Airport is in a very scenic area being next to the water and so they’ve taken full advantage of this. With the combination of the photo scenery base and lots of added objects the San Diego Bay area next to the airport has been transformed. Quite an improvement over the FSX default rendering. As part of the upgrade they have also modelled a number of the elevated roadways and overpasses that are located in front of the main terminal.

What stood out the most were the marinas filled with pleasure craft. This really added positively to the overall look of this scenic shoreline area. The floating museum, the USS Midway aircraft carrier, has also been added to the San DiegoPort.

Another prominent feature of the scenery located just south of the airport is the U.S Coast Guard Air Station. This area has been modelled to include the two large  hangars plus other adjacent structures along with two static Dauphin helicopters.

I am left with mixed feelings about the night time rendering of San Diego. Certain facets impressed and others disappointed. Starting with what I liked, the ground lighting I felt was very well done. The lighting wasn’t too bright and you can see where the ground is lit up next to the fixtures. This was also seen with the taxiway/runway markers.

Building lighting was not as good as it could have been. Interior lighting was well done as you can see that there are some windows lit up. It was the exterior of some of the buildings that I wasn’t too happy with. For many of the buildings including the largest, the terminal 1 and 2 complex, there was no variance in the shading or lighting on the walls and rooftops. When you have different light sources acting on these surfaces you expect to see some variations of light and dark; that wasn’t the case. Another problem was the way the ground near the base of many of the buildings glowed a bright blue. I found this particular problem especially annoying.

This addon had some issues that I felt negatively impacted its appeal; the lack of animated apron traffic and the night time lighting problems. However, looking beyond these two problems it is still a very nice airport that can give flight simmers many hours of enjoyable flying time along the scenic California coastal region.

As a final point. I don’t often comment about support, however as I was writing my review I encountered a problem with the scenery. I emailed their support and received immediate and very helpful assistance. One of the best experiences I have had with any developer.

As a resident of San Diego on and off for nearly 30 years I can attest to the great job these guys did on my hometown airport. Looks good, framerate friendly and they captures the feel of landing in the “bowl” just scraping over the parking lot at RWY27.

If you want the full immersion, add San Diego buildings from Utopia and MegaScenery SoCal.

I also purchased SAN (installed for FSX) and the review is absolutely true to the product, but I’d like to comment on two of the reviewer’s opinions… First, to elaborate, LatinVFR included “only” some selected landmarks of downtown and especially Balboa Park right in the approach. The deigners made a good compromise framerate-wise. Those who need even more detail and have a top-notch rig can also buy two separate San Diego “stuff” packs (https://www.simflight.com/2013/02/08/scenic-utopia-releases-san-diego-packs/), the LatinVFR scenery’s readme has a section how to integrate those. Second, where I disagree,is though airport ground traffic adds some “life”, it tends to get… Read more »

I have this scenery for FS9 and it’s outstanding. Another great effort from LatinVFR.