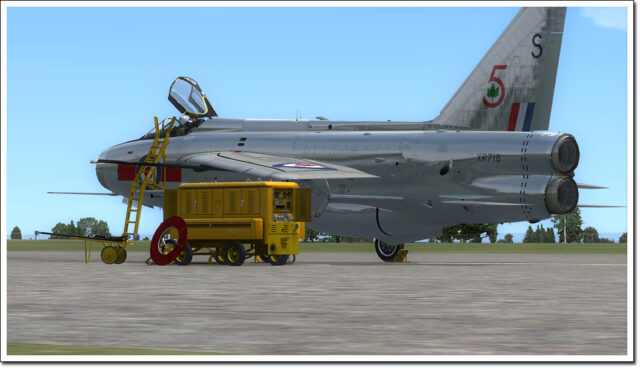 In the Cold War hangar at the RAF Museum, Cosford, there’s a jet stood on its tail, suspended from the ceiling at pretty much exactly right angles to the ground.

Why? Because it’s an English Electric Lightning and that’s what the “Frightning” does best – accelerate while climbing vertically… Possibly apart from “make noise”, that is!

It may be nothing special to modern combat jet enthusiasts, but in the 1960s when the Lightning was operational, a positive thrust-to-weight ratio was almost unheard of – although it came at a cost. While the Lightning had a phenomenal time-to-altitude performance, it had to come down pretty quickly too, running low on fuel. Aerosoft’s isn’t the first of the breed available for MS FSX, but looking at the pictures and features list posted by Mathijs Kok on the Aerosoft forum, it looks like one worth watching.

Technically there is a difference, but for the purpose of this article it’s irrelevant.

Umm… a gremlin changed it. It was a check that people actually read what we wrote. Someone hacked my article. Pick an excuse. Any excuse. 🙂 😉

Difference between “Power” and “Thrust” is? You probably mean “weight-to-thrust” ratio 😉