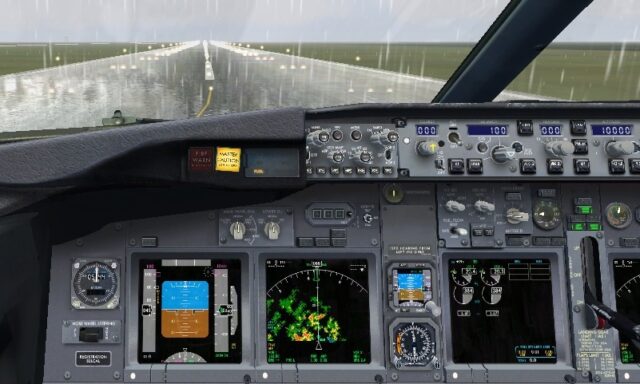 737NG developers iFly have announced that, in conjunction with HiFi Technologies, their product will soon support accurate precipitation and windshear information from Active Sky Next on its displays.

The update will be for FSX and P3Dv2 versions of the iFly 737NG only – the FS9 version will not receive this upgrade – and release is currently scheduled to be in February 2014. If you wish to follow progress, you can do so via the iFly developers’ forums.

The full press release can be read by clicking “Read more” at the end of this article.

The iFly Development Team is proud to announce support for Active Sky Next in an upcoming update for the award-winning iFly 737NG for Flight Simulator X and Lockheed Martin Prepar3D v2.0.

A few months ago, when the initial news was released about the next release of Active Sky, the iFly Development Team started to think of possibilities that would become available with this new weather engine. One of the features that was announced by Hifi Simulations is that Active Sky Next’s new weather engine will have the ability to supply a real-time feeds to drive accurately depicting weather radar on aircraft displays.

Working with HiFi Simulations, the iFly Development Team have been working the last three months on bringing accurateprecipitationand wind shear to the iFly 737NG displays. iFly 737NG gauge work continues to go along nicely on this revolutionary update. Plans are in place to have the update released sometime in February 2014 for FSX and P3D v2 customers. Due to its age, FS9 users cannot take advantage of this development.

For more information and to keep current on the latest development of this exciting new update, stay tuned to the iFly 737NG forums at http://ifly.flight1.net/forums/default.asp

The iFly Jets: The 737NG is a super sophisticated and complete 737NG addon for Microsoft Flight Simulator and Lockheed Martin Prepar3D.High accuracy simulation of the cockpit and systems, along with features such as ground support and push back, make this a premier expansion.
The product has been tested by real NG pilots to help maintain the accuracy required for this simulation.

PMDG! This an exemple of a good team reactivity about simmer’s request! Today Hifi simulation made ASN, and ASN provides to you the true position of Rain and clouds… Now, with this new I hope really you will find another excuse to don’t build a desçent weather radar for your aircrafts… I can’t imagine to make a flight with a Boeing 777 over Atlantic ocean by night without weather radar…It’s completely unrealistic! And over the water the terrain radar it just ridiculous. So PMDG let’s to give us the best!

PMDG please do the same

Didn’t PMDG specifically rule out including weather radar in the 777, at least, because they stated it ‘could never be accurate’?

I don’t know how accurate the precipitation in ASN is to what FSX presents, so can’t really comment further than that.